The RSA is today recommending a new Universal Basic Income system - a fundamental change to our system of tax and benefits. The concept has been mooted for centuries, but the RSA is now advocating a new model of Basic Income as an idea that has come of age.

Finland announced last week it is undertaking a major pilot to replace its welfare system and there are cities in the Netherlands also currently testing schemes. The RSA recommends that pilots are begun in cities in the UK as well and is calling for administrations to put themselves forwards as test cases.

Director of policy and strategy at the RSA and the report’s author Anthony Painter, said:

“The welfare state has become incredibly complex whilst locking those it seeks to help in a vicious circle of low pay, insecurity and an intrusive state. The RSA doubts the current system can be fixed. A system of Universal Basic Income is the best alternative to help people improve their own lives over time – it provides better security to support people’s needs to work, learn, set up a business or care for their family.

“Past generations have created new institutions to meet the demands of their age. Technological change and its impacts on work, an ageing society and a failing welfare state suggest we need to be pragmatically imaginative. That means we need to look seriously at a Basic Income.”

The RSA believes that there is enough historical evidence to suggest that Basic Income has a positive impact on society and will enable people to adapt to our changing modern life, whereas the current welfare system is failing to do so. The RSA undertook a year-long study into the potential benefits of each citizen being paid a basic income by the Government. It would fundamentally restructure the relationship between the state and the individual.

To this end the RSA is proposing a new Basic Income model which is a genuinely progressive tax system.  It will offer support for everybody, including low-income families who would be assisted though any transition from the Universal Credit system that is due to be implemented in the UK.

“As former head of policy for a political party and for a Prime Minister I am acutely aware of how difficult it can be to win the case for a change as far reaching and radical as a Basic Income. But I have also seen how ideas that have been around for many years, restricted largely to the margins of debate, can suddenly, in the right circumstances, acquire relevance and credibility.

A rapidly changing economy and labour market, growing public concern about the workings of our welfare system, the aspirations of citizens, particularly younger ones, for greater freedom, control and responsibility are all contributing to a moment of inflection.”

The RSA is calling its proposal ‘Creative citizen, creative state: the principled and pragmatic case for a Universal Basic Income’ because it believes that unleashing the ‘Power to Create’ is the key to building successful societies.

The RSA estimates that the system it has proposed would cost approximately an additional 1 percent of GDP. It has noted that shifts of this magnitude are far from unprecedented either by this Government, the Coalition, or the Labour Government that preceded it.

The RSA Basic Income has the following key design features:

Basic Rental Income
It will be important for other means-tested benefits, such as housing benefit, to work with a Basic Income model. There needs to be modelling work on this but the RSA says that three possibilities worth exploring are:

1. We took the Citizen’s Income Trust model as our basis because it is fiscally sound, peer-reviewed and practically achievable. The RSA Basic Income model has the following illustrative technical design based on 2012-2013 tax and benefits figures:

The above redistribution could be paid for by a charge on higher earners such that individuals, in effect, have their Basic Income entitlement fall beginning at £75,000, with complete withdrawal at £150,000. This simply covers the cost of ensuring that those on low income with young children do not lose out in a transition to this system (and higher earners with young children benefit too). We have also sought to ensure that there are few losses for earners beneath this £75,000 at a cost of £4.5bn to our model. The total costs of the Basic Income element of the model are as follows (based on the original Citizens’ Income Trust scheme): 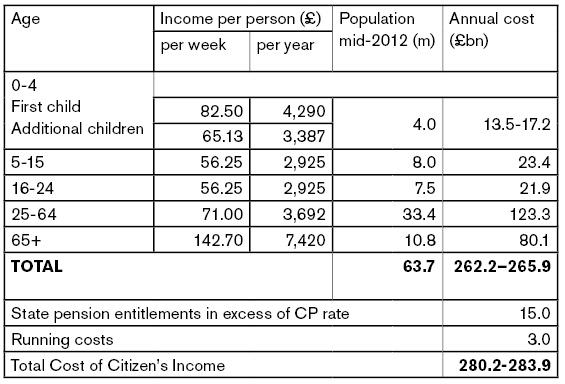 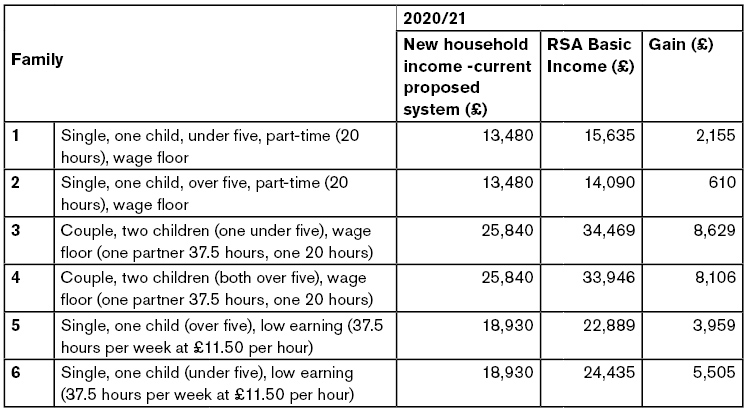 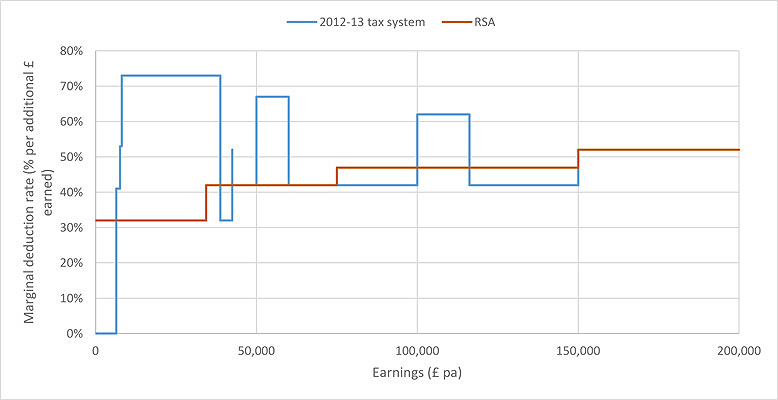