Can we save the world by taking the piss?

I apologise for the intemperate language of the title, and I had to check today wasn't April 1st before posting, but I wanted to share an idea I came across today in The Economist which involves using our pee to create renewable energy. The article features a new insight on an old idea rather than something completely original, but the upshot is that taking the piss might help to save the world.

Look, we all do it, several times a day, so if it's good for something other than moderately entertaining sound effects then let's put it to the best possible use. Contrary to the occassional wacky health fad, it's probably not very good for you to drink your main liquid waste product, but it turns out that when it comes to creating electricity, urine has a p-value that would be the envy of any good statistician. 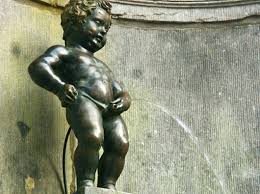 Two things appear to be true:

1) People around the world produce an estimated 6.4 trillion litres of urine every year

2) We urgently need new ways of generating renewable electricity to meet growing demand for power, especially in the developing world.

From the economist article:

"At the core of urine-tricity are microbial fuel cells (MFCs), which contain live microbes. When urine flows through an MFC the microbes consume it as part of their normal metabolic process. This, in turn, frees electrons. Electrodes within the cell gather these electrons and when they are connected to an external circuit a current is generated....Previous experiments had fed the MFCs food scraps, dead insects and grass cuttings. But urine achieved a power output three times higher than any other waste product."

So what's so powerful about our pee?

"The low level of organic carbon in urine, combined with favourable acidity and electrical conductivity, made all the difference. Where earlier tests produced minimal power, urine had the vim to recharge commercially available batteries, including those in mobile phones."

The amount of electricity generated can only make it a small part of the overall energy picture, but it's the intelligence and wisdom of the idea that I love; circular economy design principles at their best?! The Gates Foundation are already investing in this idea, and people have realised that this could make 'renewable energy toilets' commercially attractive.

You don't have to be a fanatical techno-optimist to see that this kind of thinking is a key part of any long term solution to decarbonising the economy. We also create a huge amount of energy at gyms that is beginning to be harnessed, and in many other daily parts of our lives, like climbing stairs, we could do more. We need to think it all through.

But in the meantime, let's get serious about taking the piss.