Should schools hold children back a year?

The Trust made the news last year due to high exclusion rates and a legal challenge to their use of ‘isolation rooms’, so the new policy was sure to attract attention.

Outrage has focused this time on their intention to hold children back a year if their behaviour isn’t up to scratch:

Students who do not show, over time, good behaviour, attitude and effort in their lessons, will not graduate at the end of year 8 and may subsequently remain in year 8 until improvements are made.

I was shocked and frustrated to read about this. Not because I believe that strict discipline has no place in schools. Or because I think that sanctions which ‘reduce pupils to tears’ can never be appropriate. (Such positions are worth debating, but are surely too black and white to be very helpful.)

I was shocked and frustrated because among the media coverage, the expert commentary, and the Twitter backlash I couldn’t find anyone pointing out that this particular controversy shouldn’t be up for debate at all.

We already know that holding children back a year is a bad idea. How? By looking at what has happened when schools have actually tried it.

Repeating the school year has a negative impact on students

Repeating a year has a negative impact, and not a small one. Below is a graph created by Cabinet Office based on the EEF Teaching and Learning Toolkit. It shows the cost and impact of around 30 school interventions. The cost of repeating a year is so high, and the impact so negative, that it doesn’t even fit on the graph!

The data on repeating a year has to be squeezed into its own Outer-Hebrides-style map insert. It shows that children who are held back make four months fewer progress in their learning than you would expect if they moved on to the next grade with everyone else. 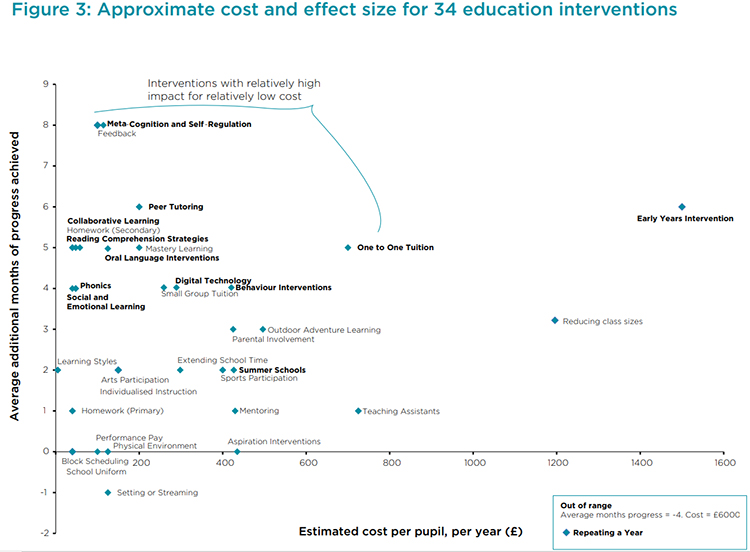 The graph is based on independent analysis by researchers at Durham University. They reviewed and summarised all the available studies on the topics presented, using only those which met objective quality criteria in their analysis.

It is important to say that, as with any research of this type, the figures are based on averages. They tell us what has happened before in other schools, not what will happen in any given school.

As Durham’s Professor Steve Higgins puts it, the average cost and impact figures are “best bets, rather than guarantees”. So, we can’t be sure of the impact for every pupil, but our well-evidenced best bet is that repeating a year is seriously detrimental.

Schools have an ethical obligation to use evidence

Surely then, schools have an ethical obligation to develop a strong evidential case for why the negative consequences predicted by the research won’t apply to them, before deciding to hold pupils back.

Consider a hospital adopting a heart surgery approach which had been shown to reduce recovery rates elsewhere: wouldn’t we demand very strong evidence that it would not be harmful to these new patients?

Getting behaviour management right is extremely difficult. No-one would claim that education research has all the answers.

We’re all trying to strike the right balance between trying to include every child, and providing a safe environment for all. Sometimes this comes down to fundamental questions about fairness and responsibility that social science simply cannot answer.

But for some questions the evidence is clear, regardless of ideology. Whether we should hold pupils back is one of those questions. We shouldn’t, because we know it doesn’t work.

The RSA’s Pinball Kids project is looking at – among other things – how mainstream schools can best support children with emotional and behavioural difficulties to thrive at school. To contact the team email [email protected]

For more information on using high quality evidence in schools and children’s services, visit the Government’s What Works Centres, including the centres for Education, Early Intervention, and Children’s Social Care.