The Covid-19 pandemic has resulted in immense suffering throughout the world, with over 140 million cases and 3 million Covid-19-related deaths reported by mid-April 2021. Over the course of the pandemic there has been a rapid accumulation of knowledge and understanding about the previously unknown pathogen, severe acute respiratory syndrome coronavirus 2 (SARS-CoV-2), that causes Covid-19. Undoubtedly, one of the greatest scientific achievements has been the successful development, in less than a year since the new virus was first identified, of several highly efficacious vaccines against SARS-CoV-2. To date, eight candidates have been approved by a regulator, five additional candidates have approval for early or limited use and several more candidates are in development. The first vaccine was administered on 8 December 2020 and, as at 14 April 2021, 840m vaccine doses had been administered worldwide, with 184 million people being fully vaccinated. 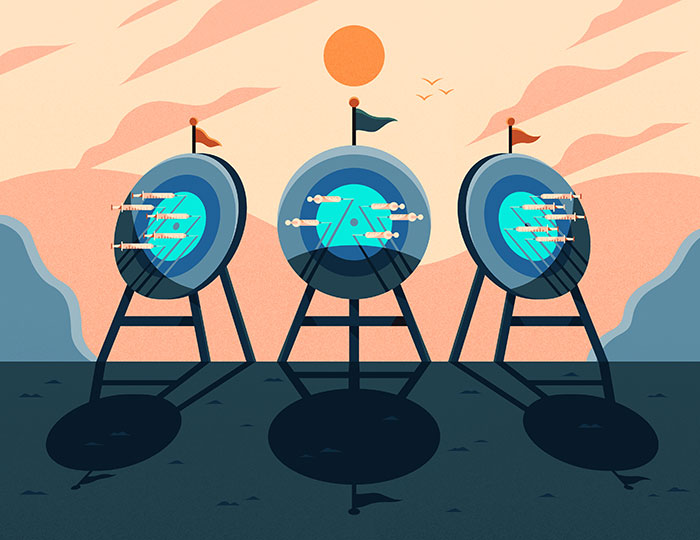 Although the development of these vaccines provides hope that we can begin to control the spread of SARS-CoV-2, the inequitable distribution and availability of vaccines across the world casts doubt on how rapidly, and even if, some measure of global epidemic control will be achievable. Currently, 77% of all vaccine doses have been administered in just 10 countries (the US, China, India, the UK, Brazil, Turkey, Germany, Indonesia, France and Russia), while some countries are yet to start their SARS-CoV-2 vaccination programmes. From a policy and public health perspective, global equitable access to a vaccine, particularly prioritising protection of healthcare workers and the elderly, is the key to mitigating the worldwide public health and economic impact of the pandemic. Unfortunately, vaccine nationalism has resulted in unequal distribution of and access to SARS-CoV-2 vaccines. The Director-General of the World Health Organization (WHO), Tedros A. Ghebreyesus, has cautioned about this issue, saying “the world is on the brink of a catastrophic moral failure”.

Global inequitable access to medicines has a long history, usually on the basis of cost. For example, poor countries with substantial burdens of hepatitis B liver disease could not afford vaccines until about a decade after the first was licensed. In the past 25 years, inequitable access to AIDS treatments has been at the forefront of this challenge. This has led to the development of several innovative solutions, including voluntary licensing arrangements for cheap generics, the Patent Pool to make intellectual property (IP) more readily available for generic medicines manufacture, and The Global Fund to Fight AIDS, Tuberculosis and Malaria as a global solidarity mechanism for wealthy countries to support treatment in poor countries.

In the Covid-19 pandemic, vaccines were not the first essential medical resource that was not equitably available. During the early stages of the pandemic, there were problems in various countries with access to personal protective equipment (PPE), cellphone technologies for contact tracing and polymerase chain reaction (PCR) diagnostic kits to identify those who have the infection. Most developing countries stood at the back of the queue for these precious resources, which were in short supply and high demand across the globe. Some of the innovative approaches to solving these challenges are now being applied to vaccines; for example, to improve its access to diagnostic kits, the African Union created the African Medical Supply Platform so that countries could pool their buying power to become major purchasers of these essential goods. Inequity in access to essential Covid-19 medical resources does not stem only from available financial resources. Direct government involvement in funding vaccine development in exchange for prioritised access, local capacity to develop and manufacture vaccines, willingness to bypass Covax and inter-country political relationships all play a part.

In addressing this problem early in the pandemic, the WHO, in collaboration with its partners, launched the Access to Covid-19 Tools (ACT)-Accelerator partnership, which supports efforts to develop tools including diagnostics, treatment, vaccines and health system strengthening to fight Covid-19. The vaccine pillar of the ACT-Accelerator initiative is known as Covax. Initiated in April 2020 by Gavi, the Coalition for Epidemic Preparedness Innovations (CEPI) and the WHO, Covax is a global mechanism that invests in the development, manufacturing, procurement and distribution of Covid-19 vaccine candidates, offering member countries equitable access, regardless of income level, to successful vaccines as they become available. At present, the goal of Covax is to provide countries with enough doses to cover 20% of their populations.

What is vaccine nationalism?

Despite initiatives like this to create global equity for vaccine access, many countries have adopted a ‘me first’ strategy that has created a global race to secure vaccines. There are four ways in which countries have become involved in vaccine nationalism. First, some countries with more resources, like the US and Russia, chose not to participate in Covax. Further, some of the participants in Covax, such as South Africa, chose to bypass it, entering into bilateral deals with pharmaceutical companies, paying higher prices and jumping the queue, thereby re-directing doses away from initiatives aimed at fostering global equity. Second, some high-income countries such as Australia, Canada, the US and the UK placed early orders to buy far more vaccines than they need for themselves; Canada, for example, purchased enough vaccines to immunise every citizen five times. Third, some countries – Russia, China and India – rushed into licensing or using unproven vaccines before the efficacy trial results were available in order to secure early access. Fourth, some countries or blocs (India and the EU for example) with vaccine manufacturing capabilities imposed temporary bans on the export of vaccines to re-direct locally manufactured vaccines to themselves.

The inequitable distribution of resources significantly undermines the effective management and control of the pandemic. This concern is not hypothetical or theoretical; it was demonstrated by the actions of individual states in the US in March 2020 regarding PPE and ventilators. During that period, the absence of a centralised federal government procurement strategy for these items meant that US states were competing against each other, against the federal government and even against cities to procure the necessary equipment. This was a disastrous situation, as it resulted in prices being driven up and PPE and ventilators being distributed on the basis of available resources, rather than need, and failure to ensure equitable and effective distribution. Such maldistribution of essential Covid-19 resources leads to the loss of lives.

Exactly the same is true of vaccines. At present there is a limited number of vaccines on the market. As such, supply is fixed, and current models predict that there will only be enough vaccines to cover the world’s population by 2023. As mentioned above, countries that can afford to pay higher prices can enter bilateral deals with pharmaceutical companies and negotiate to jump the queue. By doing so, they remove vaccines from the available pool and end up limiting vaccine allocations to other countries, which undermines the objective of systematically vaccinating the highest number of people across the globe in order of priority in the shortest period of time.

Pharmaceutical companies, with the exception of Johnson & Johnson, have not adopted a single exit price for their SARS-CoV-2 vaccines. The prices are therefore open to market forces, especially as the use of non-disclosure agreements means that these companies can prevent differential pricing from becoming public. More demand, especially from countries under significant pressure to buy vaccines, means higher prices. High-income countries with large buying capacity are able to pay higher prices, again pushing lower-income countries out of the equation and furthering inequitable distribution.

Vaccine nationalism and the hoarding of vaccines are a consequence of limited supplies. Unfortunately, SARS-CoV-2 vaccines are currently manufactured by just a handful of companies. However, there are vast capabilities throughout the world to manufacture vaccines. For example, in Africa, companies like Biovac and Aspen in South Africa, Institute Pasteur in Senegal and VACSERA in Egypt could rapidly adapt to start making SARS-CoV-2 vaccines if provided with the funding, IP rights and know-how. Access to IP has proven to be particularly challenging, as it has been argued to be a major driver of innovation. But devastating pandemics require urgent and special consideration. Essential medicines for the pandemic should be declared public goods. The IP for essential medicines like Covid-19 vaccines could then be made available either in the public domain or through mechanisms such as the WHO Patent Pool or compulsory licensing. The reliance of LMICs on others for the development of vaccines as well as diagnostic technologies has also highlighted the dire need for these countries to increase local investments in science and technology to build self-sufficiency and enhance their capacity to control pandemics.

The spread of SARS-CoV-2 in one part of the world will almost certainly affect other parts of the world. Even for a country with high vaccination rates, if neighbouring countries have ongoing elevated rates of viral transmission as they have not been able to vaccinate so widely or rapidly, new outbreaks could occur and new variants could spread when the populations interact. Defeating the pandemic requires global control, which can only be achieved through the equitable global distribution of vaccines.

Some vaccines have already been shown to have markedly lower efficacy against variants of concern, particularly the 501Y.V2 variant, which was first described in South Africa. Clinical trials show that the efficacy of the AstraZeneca vaccine was 3.2 times lower against the 501Y.V2 variant, meaning its effectiveness drops from about 70% in the UK and Brazil to 22% in South Africa.

It would be unethical and immoral if young low-risk people are being vaccinated in one country while those at highest risk, such as healthcare workers and the elderly, have not been vaccinated in other countries. This unconscionable situation has already occurred. Israel, in the midst of its third wave, has made vaccines available to young, low-risk individuals while many of its neighbouring countries have not vaccinated healthcare workers yet. In April, all states in the US, which has been grappling with a substantial epidemic, had expanded vaccine availability to low-risk young people while 10 countries in Africa had not yet started vaccinating high-risk healthcare workers. Fundamentally, there is a mistaken belief by some countries that they can vaccinate their populations and then they will be safe. This simply is not true. There is no endgame that sees one country achieving sustained control of the virus while the rest of the world is dealing with rampant spread.

The Covid-19 pandemic has been a wake-up call on how not to distribute vaccines in future pandemics. A global mandatory mechanism under the control of the UN needs to be established for the equitable distribution of essential pandemic medical supplies, in preparation for the next pandemic.

In the Covid-19 pandemic, no one is safe until everyone is safe. The spread of the coronavirus has highlighted the inter-dependence between individuals, between communities and between countries. Each person’s risk of infection is influenced as much by the actions of others as it is by their own. The antidote to vaccine nationalism is the recognition and appreciation of our mutual inter-dependence and the need to act with all our humanity to seek a just and equitable approach to vaccine access to overcome this pandemic.