What the England football team’s manager, Gareth Southgate, can teach us about social connection

The dust has long since settled on a Euro 2020 football championship in which the England team became a focal point for public conversations about national identity, racism and so-called ‘culture wars’. Their manager Gareth Southgate, declaring that “I have never believed that we should just stick to football,” earned praise for engaging constructively with these divisive, long-term issues, with a bridging voice that politicians have struggled to emulate. So what did we learn from Southgate and from Euro 2020?

The power and limits of sport

As technology fragments audiences, major sporting events offer a rare moment when millions (31 million in the UK, in the case of the Euro 2020 final) of us still do the same thing at the same time. Earlier this summer, the unscripted human drama of live sport seemed more compelling than ever to many fans across the continent. Yet this unpredictability should make us wary of sport’s power to shape identity narratives. It seems a risky gambit to stake the future politics of anti-racism on how far the England team progress through a football tournament, if three missed penalty kicks can transform the national narrative overnight. 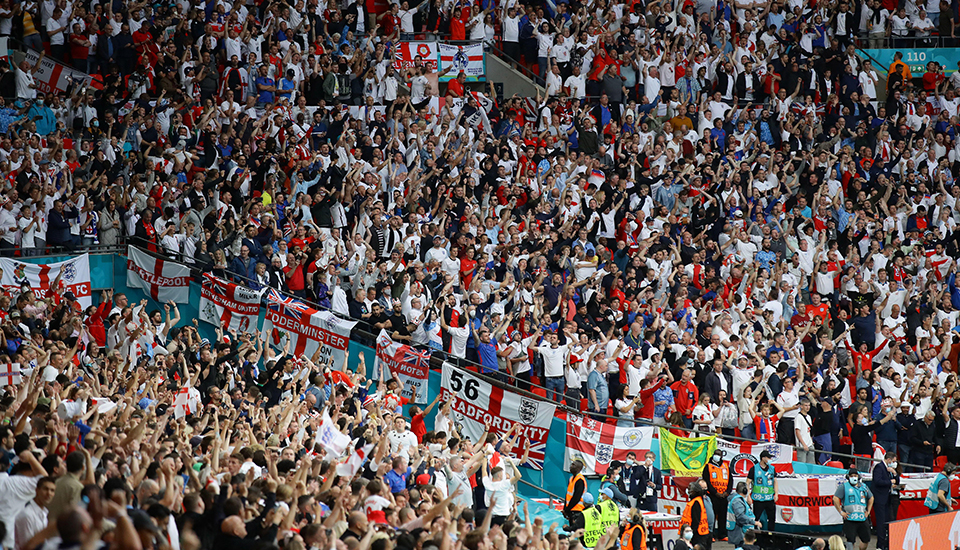 What we need to understand is what sport can do, and what it cannot. What sport does best is provide an idealised vision, such as the image of a national team of which we can all be part. Sport has the power to bridge ‘them and us’ identity divides by offering a ‘new us’ identity that we can share. This was the idea promoted by the England Together campaign, with faith and civic society advocates sending the message that “football is coming home, and it is a home we all share”, as Imam Qari Asim put it. Symbolism matters. Sporting events can demonstrate the breadth of public appetite for an inclusive story of who we are. But such heightened moments are, by their nature, ephemeral. If we find the vision attractive, we need to work out how to do the spadework to bring it closer to reality.

Euro 2020 has not called off the idea of a ‘culture war’ over identity, but it has begun to draw some useful boundaries. The political right has been reflecting on why fence-sitting, over calls to boo or boycott the England team when players took the knee as an anti-racism gesture, backfired. There is a common-sense lesson about the limits of a ‘war on woke’. It is legitimate for social conservatives to contest arguments about culture and identity from the left, but public arguments cannot be won by raging against the modern world. Rather, successful challenges to perceived ‘woke’ excess in the 2020s need to be founded on an acceptance of social shifts of the past half century that are deep-rooted. Mirroring this is the challenge the left faces to preach beyond its own tribe: a team which belted out the national anthem before taking the knee may offer insights into how to broaden the audience.

The UK’s many identities

Over the past quarter of a century – since Euro ’96 and devolution – the United Kingdom has become more conscious of being a multinational polity. Sports fans moved on from cheering for England, Scotland and Wales at Euro 2020 to supporting Team GB in the Tokyo Olympics. This intuitive understanding that most of us have more than one flag and more than one national identity is seldom seen in civic society.

We need identities at every level to be civic – open to those who wish to belong – rather than the property of an ethnic group. UK governments achieved that with British identity, the citizenship identity, while there have been significant efforts, after devolution, to shape civic identities in Scotland and Wales, and to formally recognise Northern Ireland’s multiple national identities. But few civic institutions in England can confidently navigate when and how to talk about England.

England has remained a ‘90-minute nation’, rarely recognised outside its football, cricket and rugby teams. There has been a dramatic, underestimated shift towards Englishness being understood to cross ethnic lines, yet both white English and ethnic minority citizens express much more confidence about this as a principle reflected in England’s sporting teams, with more uncertainty about whether it extends to the flag and St George’s Day. This suggests that those seeking to bridge ‘them and us’ divides across class, ethnic and faith lines in England should focus at least as much on English as British identity. Over 32 million people gave their national identity as English in the last census; only half that number identified as British. Yet the leaders of London-based national institutions, whose liberal tribe feels more British than English, often seem unaware that theirs is a less widely held view.

How to join the dots

On the first day of this new decade, a broad coalition of civic voices pledged to make this a “decade of reconnection” in British society. Nobody had heard of Covid-19 then, although the pandemic has increased the public appetite for this cause. There are several lessons from this summer about how to put that aspiration into practice.

The UK is a more anxious and fractured society than we want to be but with the potential to be more cohesive than we sometimes tell ourselves. Narratives matter, and making effective use of major national moments offers a powerful opportunity to shape them.

It is now 15 years since the former prime minister, Gordon Brown, observed that the United Kingdom is one of the few countries without a national day, though such a proposal is more fraught in a multination UK. There should be no bar to the invention of new traditions, such as the Neighbour Day proposed in MP Danny Kruger’s social connection report, Levelling up our communities: proposals for a new social covenant, to the Prime Minister last year. The greater gains in public reach will usually come from making use of the many national moments we already have. A stacked 2022 calendar includes a Platinum Jubilee, the UK Festival 2022, the centenary of the BBC, the hosting of the Commonwealth Games in Birmingham, another football World Cup, and more besides.

The gradual reinvention of existing traditions can institutionalise recurring practical opportunities to bridge divides. Remembrance, for example, has begun to significantly broaden its appeal across ethnic and faith groups in recent years. The armies that fought the two world wars resemble the Britain of 2021 more than that of 1914 or 1940 in their ethnic and faith make-up. A significant rise over the past decade in public awareness of the scale of the Commonwealth contribution deepens the opportunity for Remembrance to become an annual moment of bridging social contact. According to a survey by Number Cruncher Politics for British Future, over three-quarters of white and ethnic minority Britons support this; the challenge is to unlock and reflect that in the local practice of Remembrance.

Efforts to create new moments can repurpose pegs that already have a public resonance.

The birthday of the NHS – the most cherished of British institutions – was chosen by the Together Coalition as the occasion for its first national Thank You Day during Covid-19, generating impressive public reach for a new initiative. The Windrush story has become the key symbolic origin moment for the rise of modern multi-ethnic Britain, and the anniversary of the ship’s arrival has been marked as Windrush Day by a broad civic coalition since 2013, later adopted by government. The 75th anniversary in 2023 offers an important opportunity to entrench the story of migration and diversity as part of our national story.

Those working for social connection now need a stronger public story to join the dots, engaging local and national partners in practical strategies that use these national moments to forge a sustained movement to bridge our divides.

The Talk Together project, the largest ever public engagement exercise on what unites and divides, captures how narratives that emphasise what we share can resonate broadly but only if they are combined with a clear plan about what needs to change in policy and practice. Otherwise efforts to celebrate what we share risk being received as a Panglossian establishment-led endorsement of the status quo. The solution is to recognise clearly the divides in our society too, and to challenge us all to play our part in bridging these together.

This article first appeared in the RSA Journal Issue 3 2021.