Patrick Butler: What do you think you bring to the role of Children’s Commissioner?

Rachel de Souza: Throughout my career my commitment has been focused towards working in disadvantaged communities. I was a teacher for 30 years, 15 years as a headteacher, nine of which were as a CEO running a family of schools, and I was an early sponsored academy principal. What I bring is this experience and a belief that children deserve the best education possible, that every child – and particularly those from vulnerable groups and disadvantaged areas – deserves to be able to thrive and achieve the best outcomes and be supported to do that.

My job is to truly understand and represent the voices of children and to be able to amplify them; to take those voices to government and the public sector and make a difference. The first thing I did on taking on the role was to ask children about their thoughts and concerns – particularly coming out of lockdown – and what they wanted for their futures. We particularly made sure we asked the most vulnerable children, including those in young offenders’ institutions, in mental health wards and in care. 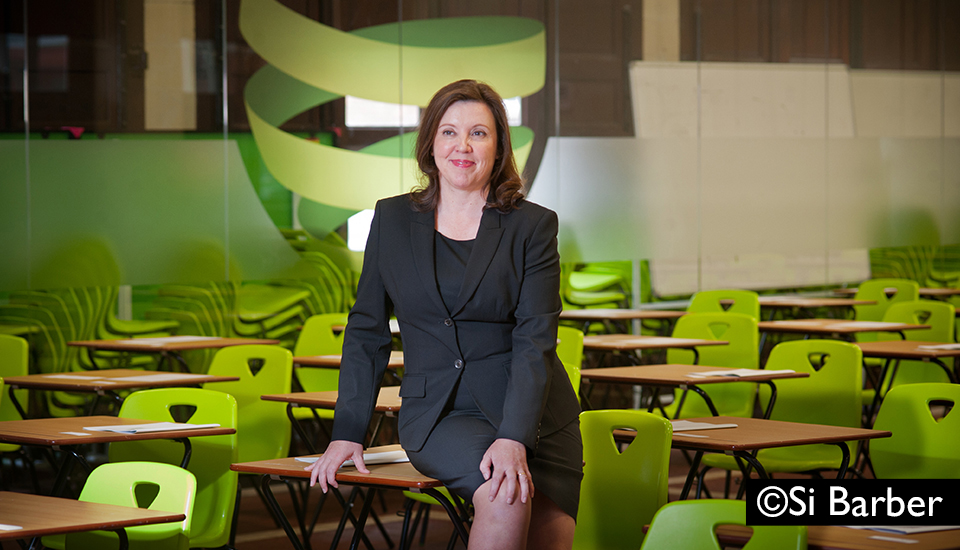 We need to transform children’s social care services, with a focus on early help for families who are struggling, including family hubs and expansion of the Supporting Families programme. We need to ensure that all children in the care system have a safe and caring home, tackling the problems of instability and the scarcity of high-quality foster and children’s home spaces for children, especially older teens.

Butler: You kicked off your tenure by launching your Beveridge Report-style review of children’s life chances and wellbeing. How is that progressing?

De Souza: I’ve been stunned and delighted by how well it has gone. We had 550,000 responses; this represents around 6% of all the young people aged between four and 18 and there’s coverage across every single local authority area. We can look at the data in terms of geographic areas and also by disadvantage, and who children have identified they live with, for instance, whether they are in care. I’ve read through a wide range of comments from children’s responses and cannot wait to share these.

Mental health was the biggest concern – 20% of the children who responded said they were unhappy with their mental health and wellbeing. There are some very powerful themes coming through about life at school, about mental health, but also about children’s own communities. There’s no lack of ambition in England’s children. They have an absolute desire for a great job and career, a great life ahead, and there’s some really mature thinking in the responses. We’re also seeing passionate responses on issues like climate, equality and fairness in society from many different angles, and some really touching stuff from children about self-confidence. The hope is that these insights can really inform policy. I went out to Grimsby, Scunthorpe, Gateshead, Manchester, Bristol, Luton; right round the country talking to children.

Butler: Do you see the solution to some of those issues as being primarily through schools and education, or do you think that solutions come from a much wider arena?

De Souza: One of the reasons I was so excited about the Children’s Commissioner role was that it reaches across the boundaries between education and the wider services supporting children, families and communities. Having been part of the education reform movement right from that first Blair academy school, I felt we needed to look at the services and the tier around vulnerable children with the same zest that we’ve looked at curriculums and improving schools. So, for example, special educational needs and alternative provision need to be seen as part of meeting children’s mental health needs.

Children are very thoughtful and concerned about education; it’s important to them both in relation to their life at school now and also to the education they need to get the future they want. That’s what they’re telling us.

Butler: Last autumn, The Guardian published an article about young people’s experiences of lockdown. One boy said: “I’ve pressed pause on my life and though I’m dying to resume it I don’t even know if there’s a play button anymore.” That encapsulated for me that sense of profound uncertainty, of a life interrupted that many young people felt.

De Souza: I talked to a 15-year-old captain of a football team in Bolton and he said that he was totally bewildered during lockdown and didn’t know what was happening. Everything that he was used to being able to do, like sport, the things that helped him to make sense of the world, he no longer had access to and he felt terrible.

And then there are children who have been bereaved. In Bolton, where they had the Delta variant first, I went to Essa Academy where a number of close relatives of the schoolchildren had died. A lot of the children said they wanted to be doctors because of these deaths; they wanted to be able to do something about it.

They also told me they needed support, that they wanted someone to talk to but they didn’t know who. While preferences were very much around the idea of digital online counselling, they also thought it would be good to have counsellors in schools.

In Bolton they were talking about their physical health and how that had gone downhill for them. Particularly the primary school children; they wanted to be able to play sport and to be out and about.

In Luton some of the children talked to me about parents who’d lost jobs or parents they were worried about who were going out in delivery vans, mums who were nurses. They had fear about that but were also wanting to be able to get out and have places to go.

What we really need to be doing is ensuring that children and young people know how to achieve the things they want to achieve. They worry they’ve missed so much learning that they’re not going to be able to get back on that horse and get a fulfilling career. It’s important to help them understand different careers and apprenticeship pathways and so on, making them aware of opportunities and reassuring them about what is going to be available. Because it’s been a shock.

It’s very welcome that the government is promising additional funding for tutoring and extra support. I want to work with the government to build on this and ensure that we have a longer-term focus on tackling the disadvantage gap for the most vulnerable learners. We need to ensure all children get a good education, support to promote their wellbeing and access to additional help if they need it.

Butler: In some ways the already serious issue of children’s wellbeing was pushed even more to the forefront by the pandemic. Do you think this’ll be a generation who are mentally scarred by their experience, or do you think that perhaps young people are more resilient than we give them credit for?

De Souza: There is no question we have an increasing mental health problem and it has been exacerbated by Covid-19. The NHS Digital stats show that, in relation to five- to 19-year-olds with a mental disorder, this has gone from one in eight before Covid-19 to one in six.

I was very heartened talking to Sarah-Jayne Blakemore, who wrote Inventing Ourselves: The Secret Life of the Teenage Brain. She assured me that the plasticity and flexibility of teenage brains means they should be able to bounce back. What we know is that having good-quality relationships and spending time with their peers – it doesn’t need to be too many – is important, and that’s why I’m really supportive of talk about extending school days, summer activities, all the programmes to get teenagers back together. In short, I don’t think children have been scarred for life but we do need to take the problem seriously.

De Souza: It was tech and digital that allowed us to remain connected and for children to continue learning during the pandemic, so we don’t want to throw away the gains we’ve made. Many children are telling us how they’re now able to use digital in a more confident and capable way; although I do think there’s an overwhelming feeling that it’s good to be back at school and you learn better there.

On the question of online harms, obviously we’ve got the Online Safety Bill coming back, which we need to take incredibly seriously.

If we’re going to do that properly we’re going to need to make age verification universal on these adult websites. This means challenging tech companies and supporting parents. I’m getting 16- to 21-year-olds to write the guidance for parents: getting them to think along the lines of what they wish their mums and dads had known. I think that’s the best voice to do it in. These issues form a real central plank of what I’m doing this next year and I think, if anything, this side of things has probably worsened during lockdown.

Butler: In March you said “I’ve seen first-hand the effects of this crisis on young people’s hopes and dreams and sometimes our answers simply haven’t been good enough.” Could you elaborate on that?

De Souza: I was making a comment about all adults to be honest. What young people have told me is that they didn’t feel visible or that their questions were answered. I wish we’d been talking directly to children more about the pandemic and what was happening, that we’d been getting messages out on children’s programmes. I never wanted to see a day that schools were closed. You have to listen to the science, but we also have to look at the harms of school closure. I suspect we will all think long and hard about the impact of closing schools and try our best not to let that happen again.

Patrick Butler is social policy editor at The Guardian

This article first appeared in the RSA Journal Issue 3 2021