Have we reached peak self-employment?

A few weeks ago the ONS released its latest labour market statistics. The papers picked up on the usual trends: that unemployment is falling and that the employment rate is rising. But few (if any) mentioned the more surprising news that levels of self-employment appear to be waning.

Interestingly, the same trend appears to bear out in other survey data. The Global Entrepreneurship Monitor, which measures entrepreneurial attitudes and behaviours across the world, found that UK start-up rates dipped from a high of 10 per cent in 2012 to 7 per cent in 2013 – the first time the figure has fallen since 2008. 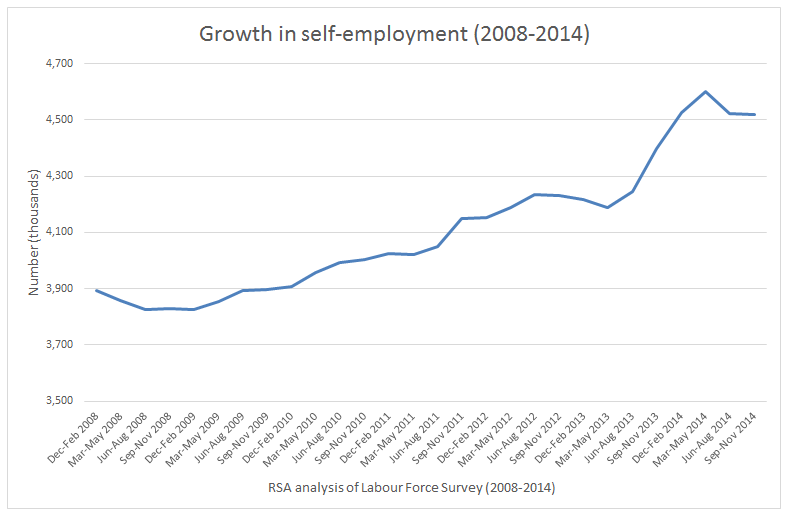 Of course, one swallow doesn’t make a summer, and it would be unwise to draw inferences from the data without waiting at least a year. But various signs do suggest that the self-employment boom may be coming to an end. The question is, should we care?

The conspicuous absence of commentary on the dip suggests that few people are interested. Yet my hunch is that it signals exactly the opposite. The reason is that self-employment has become a valuable weapon with which to beat political opponents, so naturally people want to continue believing that it’s on an inexorable trend upwards.

The right don’t want to admit that self-employment is fading as it would dispel their vision of a resurgent entrepreneurial spirit in the UK. On the other hand, the left are afraid that it would show that the economy is finally returning to normality, and that the fragmented labour market they so often talk of is, well, not so fragmented after all. Witness Will Hutton at our Self-employment Summit last week projecting that self-employment will grow to 30 per cent of the workforce, and citing this as evidence of how moribund our economy has become.

My own view is that a marginal reduction in self-employment should be seen as largely a good thing (at least in the short-term). This may sound surprising to some, since the RSA has written in various places about the importance of self-employment, not just to our economy but as a creative form of work that allows people to be the authors of their own lives.

But it would be naïve to think that everyone wants to work for themselves. Our RSA/Populus survey conducted last year found that 27 per cent of people who recently moved into self-employment (within the last 5 years) did so to escape unemployment. Likewise, the Resolution Foundation estimate that 24 per cent of the recent growth in self-employment is accounted for by people moving out of unemployment.

Ergo, what we may now be seeing is simply the reluctant self-employed leaving the community in search of conventional work. And this is surely a good thing.

In all of this we have to remember that self-employment should not be championed for its own sake. It is desirable if, and only if, it improves the quality of people’s lives. This is true most of the time, but not all of the time.

So let’s not get hung about peak self-employment. Let’s embrace it.