That’s not my inflation rate! 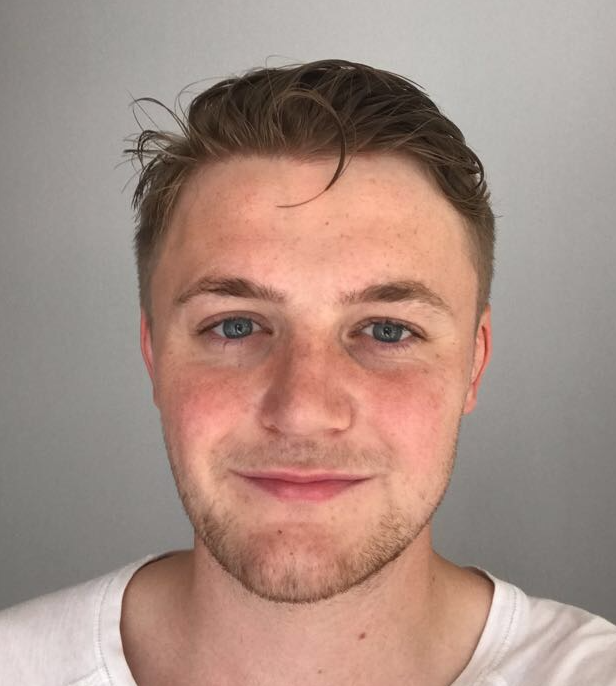 If you said we would judge you against the average person how would you feel? Would that represent your situation?

This is how our inflation rate is measured and work between Nottingham Civic Exchange and the RSA will provide an alternative.  The ONS has recently published analysis of spending and price patterns by 10 household income groups which shows that different households buy different things and these varying basket of goods change prices at different rates.

This project will spread awareness of the inner workings of this new data to help share ideas to create a way for people to understand how their circumstances impact on their inflation rate.

Why do we need change?

The Retail Price Index (RPI) was the original and longest-standing inflation measure in the UK but has been replaced by the CPIH (consumer price index including housing costs) in 2016.

Despite being the most comprehensive measure of inflation currently produced by the ONS, the CPIH doesn’t tell the full story. Alongside only highlighting, the average figure CPIH doesn’t measure credit card and household debt despite its rapid growth amongst UK households. Unsecured consumer debt amassed by British households is projected to reach 47% of income by 2021 and this isn’t currently being accounted for by your annual inflation rate.

The ONS recognises the challenges of using these measures and recently developed a more nuanced picture of inflation across the income distribution, which we will be exploring through this project. Creating a more detailed view inflation for all in society to challenge the use of a single average inflation rate is our goal.

Why we don’t experience the same inflation

The CPIH is produced by the ONS who compile a “shopping basket” consisting of around 700 annually-updated goods and services from across the country. This year you can wave goodbye to pork pies and leg waxes and say hello to pre-prepared mashed potato and women’s exercise leggings as peoples buying habits evolve.

The CPIH uses the same basket for every household in the UK, however the ONS has recently published analysis of spending and price patterns by 10 household income groups, which shows that not only do different households buy different things, but these prices change at different rates.

This under-examined factor is what we will be exploring in this project. The ONS analysis shows that lower income households (2nd income decile) spend proportionally more on “essentials” such as food and housing compared to higher income households (9th income decile), as illustrated by the graph below. Some of these differences can be ascribed to the ‘poverty premium', but we will be exploring how other issues create this difference through our project over the summer.

Addressing Economic Insecurity provides us an eye-opening account of just how underestimated the challenges of economic insecurity are in the UK. It is important to note that economic insecurity isn't solely the domain of lower-income households; the RSA found that 75% of us were concerned that the cost of living would continue to outpace wages. Median UK income is under-inflated by over £1000 over the last ten years. 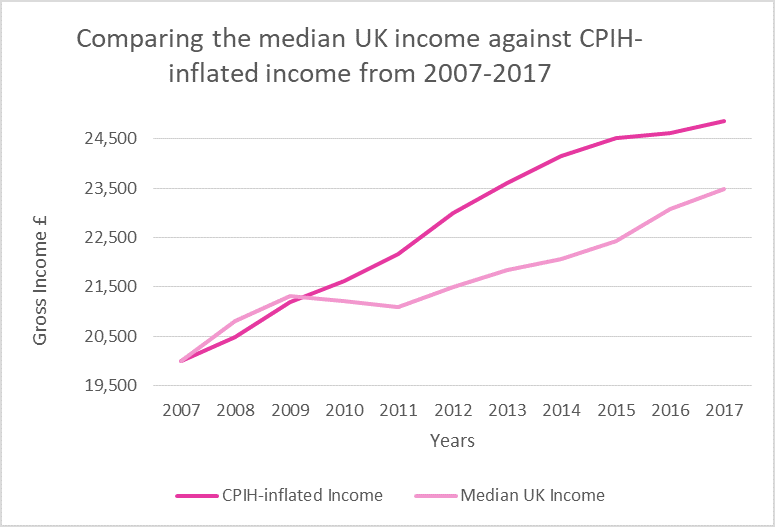 The challenge we now face is to move towards a measures of inflation that better reflects the experiences of all UK households not just the average. The ONS have begun to address this with their new Household Cost Indices (HCI) currently under development. This has provided an invaluable insight into how different groups of households have experienced inflation but we don’t think it has received the attention it deserves.

Such an index should be used by policymakers looking at ways to improve living standards in a more refined way. Inflation experienced by lower incomes is higher than the national average; benefits could be uprated in line with the HCI figure so this group aren’t penalised by he changes to their inflation rate which could maintain their living.

How different is the result of CPIH and HCI? 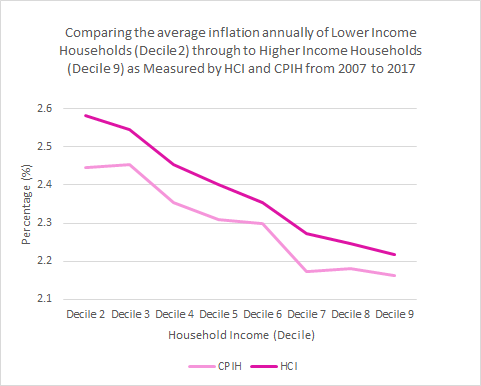 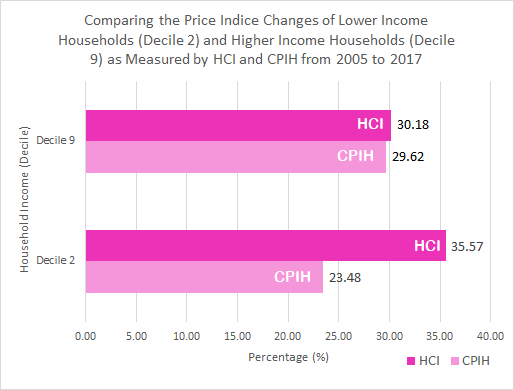 We are advocating for a headline to breadline inflation measure to inform public policy as a progressive means to improve economic security and social equality and opportunity, and will be working to illustrate this through this project with the RSA.

Our aims are to research into the alternative 'breadline' measure formally known at the HCI as a counterpart to the 'headline' CPIH, in order to make a positive change. Watch this space to see our two follow up blogs, which will look into this issue further in the context of Brexit and other repercussions for ordinary working families through July.

This blog is the first in a series exploring the potential for a breadline inflation rate. It has been written by Katie Biggerstaff and Harry Cooke research students from Nottingham Trent University who are working with the RSA, Nottingham Civic Exchange and Nottingham Business School. Follow the project via #BreadlineInflation.

Katie Biggerstaff is a student at Nottingham Trent University; who is about to start an industrial placement after finishing her second year studying Economics with International Trade and Development. She is taking part in a student researching bursary scheme in association with the RSA and the Nottingham Civic Exchange; looking into alternative measures of price inflation for low income households. She will be producing three blog styled articles and work towards creating a data too along with another student. This is all in the hope of spreading awareness of the inner workings of household cost indices to a wider group; in order to address economic insecurities and improve inequality for those on the breadline by influencing public policy.

Harry Cooke is a student at Nottingham Trent University currently researching into the potential for a breadline inflation rate. His wider interests include structural inequalities, the minimum wage and alternatives to traditional economic metrics such as GDP.

Economic insecurity in our times: the RSA’s new analysis

Anthony Painter discusses the state of 21st century economic insecurity and why work alone is not enough to keep it at bay.

Atif Shafique looks at the implications of recent research, asking whether we should consider a root-and-branch change of social policy.

Insecurity and the new world of work

The work-place is increasingly harmful to well-being, security and individual control and agency. We need some radical new thinking, argues Anthony Painter.