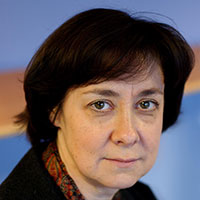 Columnist at The Independent

Mary Dejevsky is a columnist at The Independent of London and a regular contributor to the Guardian and other publications. A past correspondent in Moscow, Paris and Washington, and special correspondent in China and Germany, she contributes to several specialist and online publications and broadcasts regularly on British and US radio and television. She graduated in Modern Languages from Oxford University, and began her professional career with the BBC, before moving to The Times and then to The Independent. She is a member of the Valdai Group, invited since 2004 to meet Russian leaders each autumn, a past honorary fellow at the University of Buckingham, and a member of Chatham House. She contributed the introductory essay to The Britannica Guide to Russia (Constable Robinson, 2009) and authored chapters for books on the Soviet media (1988) and Hillary Clinton (1999).