RSA JFN hosted “Tokyo’s Food Future: Rainbows Follow a Downpour”, a panel discussion designed to raise awareness and inspire action related to the future of food. This was the first of a series of three events entitled “Dialogue: Grow-Feed-Innovate” which echoes the work of the RSA's Food, Farming and Countryside Commission.

We are thrilled to be running the series in collaboration with a new partner, Venture Café, as part of its Thursday Gathering, a weekly event held at Toranomon Hills Café in central Tokyo. The event attracted over 50 guests from a wide range of ages, nationalities and occupations. 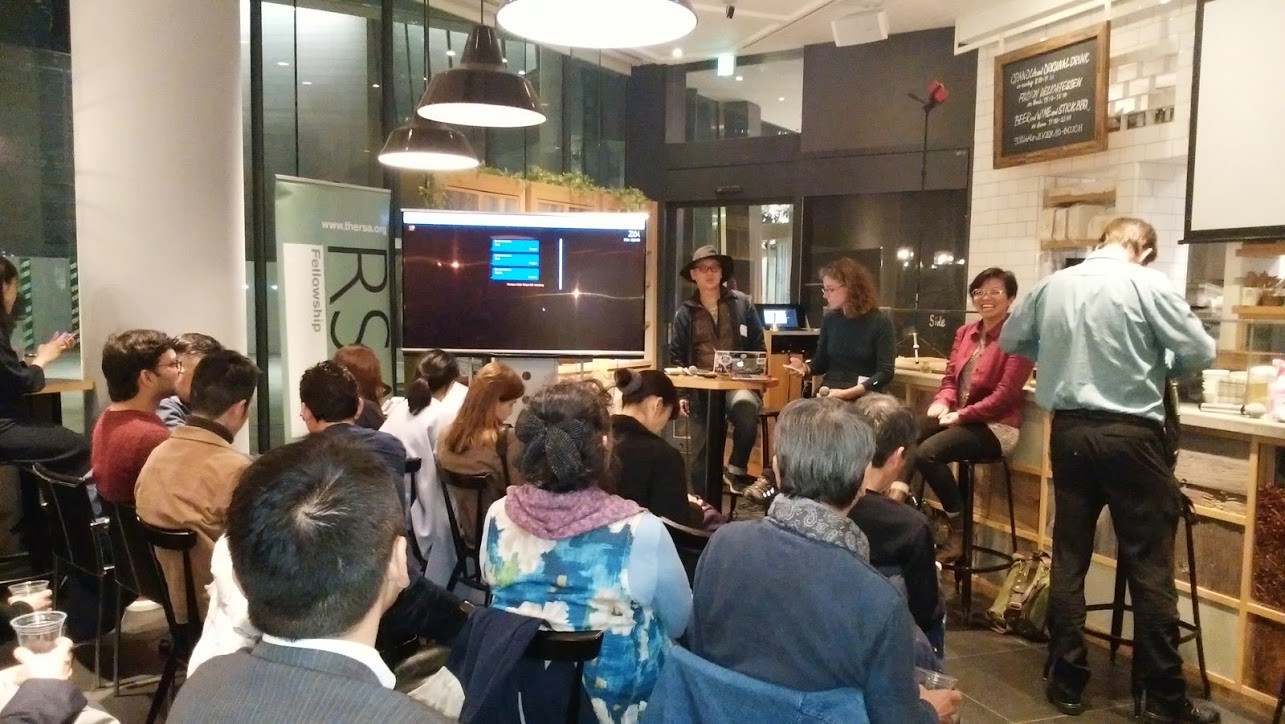 This series is the brainchild of Mike Kato FRSA, whose company, Japanese Greats, frequently tackles projects related to sustainability and agriculture. For this first session, Mike brought together three speakers each with a distinctive take on the challenges and opportunities facing us here in Japan: Joan Lambert Bailey a writer about food, farming and farmers markets in Japan; Jon Walsh, Director and CEO of Business Grow; and Emi Do, Ph. D, a student in Agricultural Economics and Cooperatives.

It was moving to hear how the three speakers have stayed true to their passion in the face of apathy and disinterest from society at large. Inspired by their examples, I came away with two new resolutions. The first was to buy more organic produce – a commitment I put into practice that weekend. The results of my cooking were noticeably tastier than usual, which meant that I ended up using less seasoning. It struck me that in doing so, I might even have offset the extra cost of buying organic! The other resolution I made was to grow my own vegetables. I asked one of the speakers, Jon Walsh, which vegetables are easiest to grow. Along with his answer he gave me a packet of lettuce seeds, so I now have no excuses…

One of the benefits of growing our own vegetables, as Jon pointed out during the event, is that it helps to minimise food waste. If we grow our own lettuces we can pick only the number of leaves we need for each meal, and leave the rest of the plant still growing. And, by putting in the time and effort needed to grow vegetables we learn to value food in a new way, making us more likely to avoid throwing it away.

Someone in the audience shared his experience of trying to grow vegetables on the roof – an attempt which was blocked by the building manager. He asked the panellists if they had any advice for overcoming this kind of resistance. Joan Lambert Bailey gave a wonderful reply. Her suggestion was to launch a long-term charm offensive. Start by offering the building manager some home-grown vegetables as a gift. Let them know that it would be easy to grow vegetables on the roof. Later, casually mention the fact that Suzuki san in apartment 202 is also hoping to grow her own vegetables. With luck, over time, you will break down any resistance and be able to convert the roof into a growers’ paradise!

The panel discussion lasted one hour, after which guests gathered in the networking area to enjoy free drinks provided by Venture Café. I was particularly delighted to bump into a student from Tsuda University who had attended a previous RSA JFN event. This time she had brought along her mother who shares a concern for the future of food in the city. Her mother told me that the event had inspired her to convert her good intentions into action – further credit to Mike and the three panellists.

The second event in the series will be on 23rd May, also in partnership with Venture Café, this time focusing on the relationship between food and architecture. We look forward to reporting on another inspiring conversation.

Tania Coke is the RSA's Ambassador in Japan. To find out more about the Japan Fellows Network, checkout their website or recent newsletter.

The work of the RSA Food, Farming and Countryside Commission will go to the heart of who we are and who we want to be: as individuals, households, and communities.

Soil Association - Why We Need A Green And Healthy Brexit For ...

A national tour is asking the public about what matters to them about food, farming and countryside, as the UK negotiates its exit from the EU.