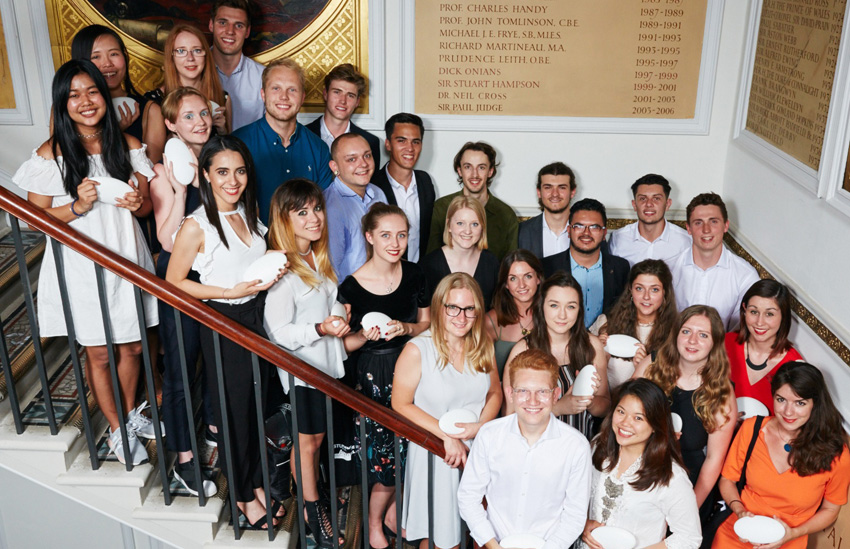 21 June 2017: the hottest June day in Britain in over 40 years, and much more significantly, the day of ‘Designing our Futures: 2017 RSA Student Design Awards Ceremony’. Award winners, judges, industry partners and friends eschewed the evening sun and instead made their way to RSA House in London to enjoy something even better – a celebration of the 2017 Awards (our 93rd year!) and design for social impact.

The 2017 Award Winners arrived ahead of the main Awards Ceremony for a packed afternoon hearing more about the RSA Fellowship, meeting a panel of RSA Student Design Awards Alumni, and participating in an ‘industry insights’ session with designers from different sectors and disciplines.

By 6:30pm the RSA’s historic Great Room had filled to the brim with guests for the Awards Ceremony. Our keynote speaker David Constantine MBE, who won an RSA Student Design Award in 1990, received the RSA Bicentenary Medal in 2010 for his outstanding contribution to the advancement of design in industry and society through his mobility charity Motivation, and this past year chaired the judging panel for our #HackOnWheels challenge.

David captivated the audience with his personal journey, speaking candidly about an accident in 1982 that left him wheelchair dependent for life, and ultimately led to his passion for design and enrollment on the Industrial Design MA at the Royal College of Art in 1988. It was whilst studying there that David won an RSA Student Design Award for his redesign of the camera bag for people with disabilities, and also won another competition brief for his design of a wheelchair for people living in developing countries. David and his project partner Simon Gue used the prize money to travel to Bangladesh. Not long after they completed their studies, The Centre for the Rehabilitation of the Paralysed in Bangladesh invited them back, and the first Motivation project was born. Fast forward to today and Motivation, the mobility charity that David co-founded and continues to lead, has transformed the lives of tens of thousands of people with mobility disabilities around the world. David and his team currently supply 12,000 wheelchairs every year that are suited to the disability, needs and environment of people living in developing regions, and crucially, they also deliver the training and support users need to be healthy, confident and included in society.

David’s speech was met with rapturous applause, and next Clive Grinyer opened the presentation of the awards. Clive won an RSA Student Design Award in 1982, is now Service Design Director at Barclays bank, and is a valued member of the RSA’s Design Advisory Board. Clive announced the winners and they took to the stage to receive their physical 'stepping stone' awards (designed by RDI Robin Levien) from David as their projects lit up the big screen. Once the final award had been handed out, Clive – who spent the whole afternoon ahead of the Awards Ceremony with the 2017 winners – ended with a message to them: “It’s been inspirational seeing your talent and ability to apply design to such a diverse range of complex challenges. It’s been a total joy talking to you throughout the day.”

With the last award handed out and formal proceedings over, the celebrations continued over a drinks reception downstairs until the RSA closed its doors. The full Awards Ceremony is available to watch via YouTube on RSA Replay, and see the hashtag #RSAdesign for Twitter activity.

The Awards Ceremony brought the 2016/17 RSA Student Design Awards programme to a close, and over the next few weeks we’ll be mostly preparing for the launch of our 2017/18 Awards. The new briefs will be released online in August, and our London Launch and Briefing Event will take place at the RSA on 26th September 2017 – make sure to save the date, and sign up to our newsletter via our home page to receive event updates and invitations from us.

So to wrap things up for 2017/18, all that remains to be said is another massive congratulations to all of this year’s winners and finalists, and a huge thanks to all of the industry partners, judges, university tutors and participants who’ve made this, our 93rd year, such a fantastic success – thank you!