Possibility Thinking: Reimagining the future for FE and Skills

The FE and skills sector is once again in the midst of fundamental change, to a new era of devolved skills policy, college mergers and rapid apprenticeship growth.   To take full advantage of this moment, the sector needs a shift in self-concept; imaginative, assertive and creative leadership and an optimistic outlook - imagining new possibilities, both for its role within communities and in its own self-improvement.  The recent referendum has revealed the extent to which many people in the UK feel otherwise disenfranchised and excluded from the benefits of economic growth.  In its wake, the need for the sector to develop its role in sustaining cohesive and thriving communities has been made even more urgent.

Possibility Thinking is a new collection of essays published by the RSA in collaboration with the Further Education Trust for Leadership (FETL).  It focuses on three interconnected and overlapping areas of change that will enhance the FE and skills sector’s potential to develop the creative capacities of learners and their communities:

Each of the 8 essays in this collection responds to a different ‘what if’ question, with authors being invited to respond with deliberate idealism about the future possibilities.  We have focused on what the sector can do for itself, mindful of the current policy context, and identifying ways that policy might enable, rather than constrain, sectoral innovation and public value.  Authors have been chosen to represent a range of perspectives from within and outside FE and skills:

Philippa Cordingley is the Chief Executive of the Centre for the Use of Research and Evidence in Education (CUREE).

Paul Crisp is the Managing Director of CUREE and its Chief Information Officer (CIO).

Bill Lucas is Professor of Learning at the University of Winchester and Director of the Centre for Real-World Learning.

Rowan Conway is the Director of Development at the RSA.

Oliver Broadbent is Director at Think Up.

Anthony Painter is Director of the RSA’s Action and Research Centre.

Charlotte Alldritt is Director of Public Services and Communities at the RSA.

Paul Little is Principal and Chief Executive of City of Glasgow College.

The publication is edited by Mark Londesborough, Programme Manager – Creative Learning and Development, with foreword by Dame Ruth Silver and afterword by Martin Doel.

The Further Education Trust for Leadership (FETL) has launched a major new report as a follow on to last year’s collaboration with the RSA.

The follow-up report, Possibility thinking: Creative conversations on the future of FE and skills, is a selection of the essays published as part the first phase of the project and features two new essays on subjects early readers felt were neglected in the original publication – the role of independent training providers and the role of governance. It also includes thoughtful responses from people within the sector to the ideas contained in all the essays. Crucially, it aims to provide a critical space in which these ideas can be further explored in written conversation and taken forward within the FE and skills sector. 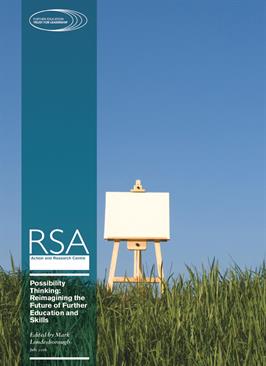