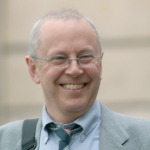 Steve Iliffe is a professor of Primary Care for Older People at University College London, having been a general practitioner in inner London for 30 years. He is the director of the Centre for Ageing Population Studies within the Department of Primary Care and Population Health at UCL with a research programme in health promotion in later life as well as in dementia studies. He has an interest in health services research, evaluating a system of health promotion in an EU-funded trial (the ProAge study) and is co-author of Cochrane systematic reviews on visual function screening in older people. He was the co-principal investigator in an RCT of educational interventions for dementia in primary care, one of the few such studies to show a change in clinical practice after intervention, and is Chief Investigator on the EVIDEM programme funded by the UK National Institute for Health Research and on the ProAct65+ trial of exercise promotion. In addition, he is an associate director of the UK national co-coordinating centre for Dementias and Neurodegenerative Diseases research Networks.

He is a Visiting Professor at the Gerontology Centre, Charles University, Prague.