A Matter of Conviction: a blueprint for community-based prisons

'A matter of conviction' sets out a new way of running the prison and probation system in England and Wales to promote rehabilitation and protect the public.

The report is the culmination of the year-long Future Prison project by the RSA and Transition Spaces into how 21st century prisons could better support rehabilitation. It is the first comprehensive inquiry into the whole prison system, involving everyone from serving and former prisoners to specialists in education, employment and health, as well as those with senior prison experience.

The report calls for the government’s forthcoming white paper to prioritise a 2017-20 National Rehabilitation Strategy that includes a new legal rehabilitation duty on prison; urgent investment in staffing numbers and skills, and devolution of powers to community-based prisons.

The report concludes that -

The programme’s Advisory Group was chaired by former prison governor John Podmore. Other members include: 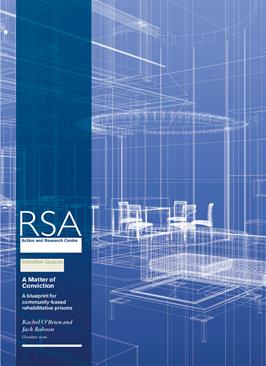