Boosting the living standards of the self-employed

New measures are needed to improve the living standards of the most vulnerable self-employed, with changes to National Insurance, Universal Credit, pensions and maternity and paternity pay being key priorities.

The number of people in self-employment has grown by 40 per cent since 2000, with the result that a record 1 in 7 of the workforce now answer to themselves. Should these growth rates continue, the RSA predicts that the UK’s self-employed community could soon outnumber the public sector workforce.

Political parties of all stripes have come out in support of this boom and put forward several proposals to assist the self-employed. Among the measures introduced by the Coalition government are the StartUp Loans scheme, the abolition or amendment of 3,000 regulations, and the introduction of multiple tax breaks. Labour have sought to match these initiatives with several of their own pledges, including a promise to create a network of regional banks to improve lending to small firms.

While each of these moves should be welcomed, they are overwhelmingly centred on supporting businesses as entities in themselves, rather than the individuals that sit behind these businesses. Put another way, they have sought to help firms become profitable as opposed to making self-employed lives liveable.

Against this backdrop, the RSA embarked on a project to better understand how the livelihoods of the self-employed could be improved. In doing so, we examined issues such as earnings, pensions, mortgages and welfare. The main challenge facing the self-employed is that the burden of dealing with risks largely falls to them alone. For example, they have no recourse to Statutory Sick Pay should the fall ill, nor to Statutory Maternity Pay if they become pregnant.

Yet despite these perils and pitfalls, our analysis reveals that the self-employed are on average more satisfied than employees both with their work and life overall. As such, our proposals should not be framed as a means of ‘saving’ people from self-employment, but rather as a way of enabling more people to take part in meaningful self-employment, which at its best allows workers to flourish as creative individuals. 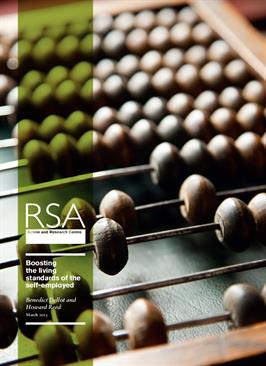