This report argues that prisons will continue to struggle to rehabilitate offenders unless they are able to develop stronger, more positive links with their communities and economies.

The RSA sets out an alternative model of a not-for-profit community prison that would provide custody and rehabilitation services on a single site, bringing back to life unused Moj assets adjacent to existing prisons. It proposed a model where prisoners and ex-offenders would be paid to work in social enterprises. Was there a way to benefit from the innovations and freedoms that can come with private investment and partnership, but with the ethical constraints and focus of the public and voluntary sector?

We were struck by the fact that the work of prison officers and the service was largely invisible or misunderstood by the public. Whereas people would defend the NHS and schools and believed they understood health and education services, the prison service is something that happens ‘out of sight’, and is largely ignored, until something goes wrong. Yet in polls the public put crime at the top of their concerns. What kind of approach would better involve people, communities, and employers in helping prisons to do the work that we ask of them?

These questions and more will inform the study the RSA is undertaking as we assess the potential for taking the Transitions idea to the next stage and is working with a public prison in East Yorkshire to this end. Since publication of its original ‘vision’ pamphlet in 2011, the RSA has secured funding to undertake a major feasibility study throughout 2013. 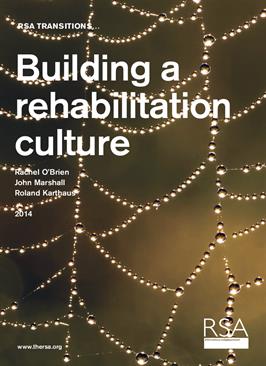