Changing the narrative: a new conversation between the citizen and the State

The relationship between state and citizen is changing more rapidly now than for a generation. Expectations and obligations long familiar to the UK’s citizens, policy makers and service providers are being reassessed; and the UK is far from being alone. The pressures that are redefining the relationship – fiscal, technological, demographic, cultural and ideological – are being felt in other advanced economies, whether they have traditionally followed social democratic, Christian democratic or liberal welfare models.

These pressures have re-ignited long-standing debates about the size of the state. On the right, the charge is that the modern state has succumbed to ‘elephantiasis’ and needs to become smaller to be affordable; while on the left the accusation has been that economic crisis is being used by elites renege on fundamental aspects of a progressive social contract. UK public expenditure as a proportion of GDP will fall significantly under the current government, with Total Managed Expenditure of 40.7 percent reducing to 36.3 percent by 2020-21, achieved in large part through deep cuts to Departmental Expenditure Limits. Smaller budgets are part of the small state reality being faced by public service leaders – including leaders of children’s services – for the foreseeable future.

But beyond arguments about the size of the state are debates and new practices, which focus on the nature of the state, and more particularly on the nature of its relationship with citizens. Over the last twenty years, a model of the state as preeminent planner, paternalistic manager and sole provider of public goods has been challenged by fresh accounts of knowledge, participation and social collaboration, from disciplines as diverse as political economy, human geography, behavioural science, political science and systems theory.

The ‘Changing the Narrative’ project has been created by the Staff College in partnership with the RSA to examine this emerging theory and evidence. We have interviewed thought leaders and examining UK and international sources in order to construct models and scenarios. Our final report sets out a narrative that can be used by children’s service leaders and their partners in communities as a basis on which to negotiate sustainable change with their citizens and communities. 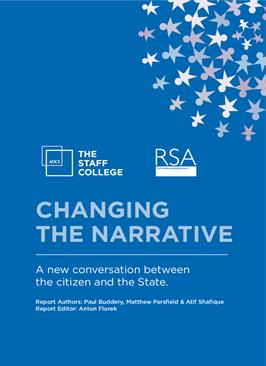