Citizen Power Peterborough (CPP) is a three-year project developed by the RSA in partnership with Arts Council England East (ACE) and Peterborough City Council (PCC). The programme was a unique, multidimensional, partnership in place-making and citizen activism.

This report marks the end of the project and draws on an evaluation of the project undertaken for the AHRC by Dr Mark Roberts of De Montfort University. However, it is not a rigorous, quantitative evaluation. Instead, its aim is to give an honest ‘warts and all’ overview of CPP that can provide insights and lessons for others seeking to tap into citizen power.

CPP began in mid-2010 at a time when many initiatives sponsored by the Labour Government had focused on citizen engagement and just as the Coalition Government began its programme of public service funding cuts. It sought to put meat on the bones of the then new Prime Minister’s idea of the Big Society.

The CPP approach focused on cultivating three of the conditions necessary for a more vibrant civil society: supporting people to be more civically active (participation), creating stronger connections between people and where they live (attachment), and developing new citizen-led responses (innovation) to long-standing social and civic challenges such as drug dependence and anti-social behaviour.

This focus emerged in response to two factors. The first was local conditions in Peterborough. Citizenship and Place Surveys data from 2009–10 showed levels of civic participation in Peterborough to be below the national average with key generators of citizen power like attachment to place, social trust and respect for other people, all lower than the average unitary authority in England.

When CPP began, Peterborough was already on a journey to grow citizen power. A major discussion involving city stakeholders had been held under the title Perception Peterborough, drawing on the insights of political theorist and former White House advisor Benjamin Barber. Peterborough City Council had also introduced Neighbourhood Councils to localise decision-making.

The second factor is a widespread belief, held by among others, political parties, think tanks, and a range of public intellectuals, that increasing civic engagement is an essential part of strategies to renew democracy, reform public services and respond to social change. This belief is part of the RSA’s commitment to increasing human capability and was inherent in David Cameron’s extolling of a Big Society. 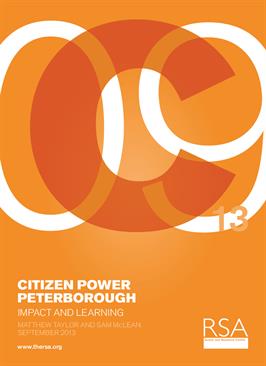