All clapped out? Key workers living through lockdown

Key workers have kept the country going during the pandemic, but some are facing the worst of the economic turmoil created by it.

1. Most key workers report doing financially well during lockdown: over sixty percent (63 percent) say their household has been “very” or “relatively comfortable financially” during the pandemic.

2. However, not all did well. Certain groups of key workers still had to access their savings throughout the pandemic: 22 percent of supermarket workers; 20 percent of those working in transport, utilities or communication; 18 percent of school and nursery workers; 14 percent of social care workers; and 10 percent of NHS staff.

3. 20 percent of key workers saw their hours decrease through the pandemic. This was largely driven, perhaps unsurprisingly, by school and nursery staff (36 percent saw fewer hours) and by transport, utilities, and communications workers (23 percent).

4. 27 percent of supermarket workers and 22 percent of social care workers also said they would find it difficult to pay an unexpected bill of £100.

5. 58 percent of all key workers said that they have found it more difficult to maintain their mental health as a result of the pandemic, with 21 percent finding it “much more difficult”.

7. In response, the RSA is calling for an expansion of Statutory Sick Pay to all employees, greater provision of mental health services for key workers, and a one-off bonus of £500 for those working in social care.

Supported by Standard Life Foundation and the Trust for London. 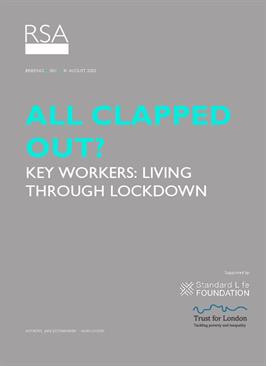