The government has recently announced its intention to enable the introduction of Collective Pensions in Britain. Over the past four years, the RSA has researched the advantages and pitfalls of Collective Pensions. It has advocated that these should be allowed in the UK, provided that there is an appropriate legal and regulatory framework.

In this briefing note, the RSA sets out in simple terms how Target Pensions work, what are their advantages and their pitfalls - including how they provide a 33 percent better outcome than individual saving and result in more predictable returns. The RSA believes that now is the time to act and that British people should be allowed to save for retirement through collective pensions, just like people in Holland, Denmark, parts of the United States, Canada and Sweden.

The RSA has campaigned for the past three years for the introduction of collective pensions in Britain. They provide better outcomes to savers, with higher and more predictable pensions.This paper offers a unique evaluation, supported by modelling by Aon Hewitt, showing how collective pensions would have performed over the past 57 years. It concludes that they would have:

Others have joined the RSA in its call for collective pensions. They include the CBI, the TUC, the National Association of Pension Funds and the Association of Member Nominated Trustees. We believe this strong consensus between stakeholders gives a unique moment to introduce collective pensions in the UK.This month, following the culmination of over a year of research and consultation, the DWP will set out its findings on collective pensions. Now is the time for them to act. British people should be allowed to save for retirement through collective pensions, just like people in Holland, Denmark, parts of the United States, Canada and Sweden.This paper sets out the case urging the government to legislate to make collective pensions possible in the UK within an appropriate regulatory framework. 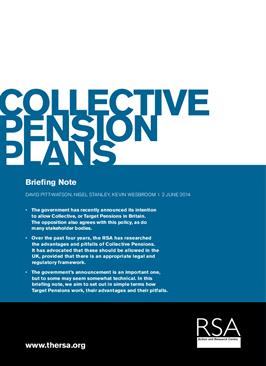