Devo Met: charting a path ahead

An ambitious new timetable for the clear and transparent devolution of power to UK cities must quickly be put in place by the next government, says the RSA’s latest report on city growth and devolution.

Influenced by the RSA City Growth Commission, considerable policy progress has been made. Since the Commission’s final report, ‘Unleashing Metro Growth’, published in October 2014, Greater Manchester, Sheffield and Leeds city-regions have agreed devolution deals with central government. Greater Manchester has also been given control of its health and social care budget, amounting to an additional £6bn of devolved funding to the Combined Authority and its partners.

In the recent Budget, the Chancellor announced that Greater Manchester and Cambridge would be able to retain 100% business rate revenue, informing the wider review of the local non-domestic property tax.

However, a clear framework for sub-national devolution is needed to bring transparency and legitimacy to what has so far been an evolving series of ad hoc deals and closed door arrangements. This report calls on the government to establish anIndependent City Devolution Commission (ICDC) - the equivalent of the Smith Commission for city devolution - to quickly work up policy detail and guide draft legislation.

An ICDC would ensure that city-regions which can demonstrate competence, accountability and collaboration, and have the economic platform and potential to shoulder financial risks, should be able to enter into devolution negotiations with central government. The report suggested that the Independent City Devolution Commission (ICDC) could be responsible for holding government to account for the pace and degree of progress on devolution, reporting annually to Parliament.

The Commission would help to work through five areas that need to be resolved if the UK is to resume a sense of stable and coherent political economy: 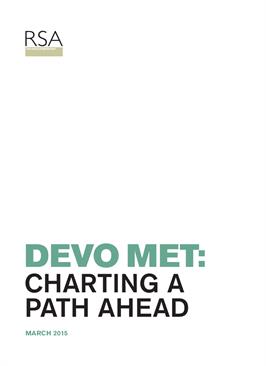