Prospectus for the Citizens' Economic Council

Economics affects everyone but few people feel able, or have the opportunity, to have a say on economic policy. If the quality of public debate about the economy improved, if citizens felt more understood and listened to, and if there were stronger accountability mechanisms between people and government so citizens could influence the conversation earlier on and upstream, then we might have stronger, more effective economic policies.

In this prospectus, the RSA makes the case for why we need a better and more democratic economic debate and the creation of a Citizens’ Economic Council as a vehicle to help achieve it.

In this prospectus the RSA look at the success of citizen deliberations on economic issues across the world and the value such processes can add in four case studies– Porto Alegre’s participatory budgeting in Brazil, Ireland’s Convention on the Constitution, Melbourne City Council’s People’s Panel, and Iceland’s Constitutional Council.

We introduce the RSA’s Citizens’ Economic Council - a Council of 50-60 citizens which will deliberate about the UK economy, its outcomes, and co-create policy with policymakers over the next two years. The Council is unique in its goals and objectives – it is the only deliberative engagement process focused on exploring national economic priorities and values and engaging citizens in shaping and advocating for economic policy ideas. This prospectus for the RSA’s Citizens’ Economic Council outlines the direction of travel towards a better public conversation and a more democratic economy in the UK, so that economics is made accessible and engaging for everyone. We invite you to join the Council on their journey, to get involved so that you can have your say – and to  play your own part;  whether you are citizen, policymaker, or economist – in the Citizens’ Economic Council’s success.

Watch the launch event Can citizens be economists?

Read the prospectus online 'Economics for everyone' (on Medium)

Find out more about the RSA Citizens' Economic Council 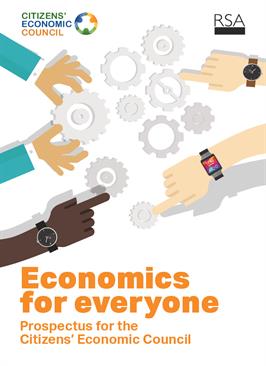