It was only with a massively expanded police presence on the fourth night of the riots, that the police finally got a grip on the turmoil.

But by the fourth night it was not only the police who were beginning to make their presence felt on the streets. So were civilians. Many of these came together in groups. In Enfield, north London, and Eltham in South London groups of residents patrolled the town centers. Shopkeepers in Hackney closed their shops for the night, and took up position in Kingsland High Street. Residents and shopkeepers chased off would-be looters in East Ham and Bethnal Green. Several hundred Sikh men gathered to defend their temple in Southall. There were also examples of individual residents and shopkeepers standing up to and confronting the rioters alone.

This paper sets out to explore what we know about this emerging area of community safety policy and practice.

The paper is directed at two broad audiences. It is intended to:

This paper is based on:

The report was jointly supported by the RSA and Nesta 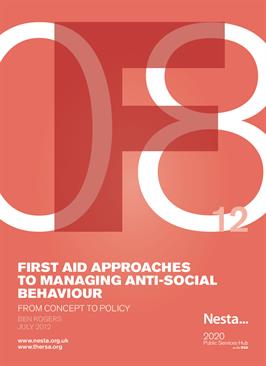