From Big Society to Social Productivity

The problem of the deficit has been clearly presented, and the narrowness of spending parameters for public services well documented. The government’s plan is to eliminate the structural deficit by 2015, implying an overall fiscal tightening of £110b by that year, with 73% of this reduction (£80b) coming from cuts in public spending.

The coalition government and opposition are united in the need to bring the deficit under control, even though they remain sharply divided on the timing, and on the proper balance between tax rises, spending cuts, and how to generate growth. No-one can predict the long-term impact of spending cuts, but despite differences on the scale of these, a conviction in the need for greater fiscal austerity is shared across the political spectrum.

In contrast, the Big Society narrative remains hazy. It is, as Jesse Norman MP has argued, a ‘big idea’, ‘not reducible to a single soundbite’. In the run up to the general election, Conservative Party activists reported that the concept was hard to sell on the doorsteps.

This may have been because the Big Society policy prescriptions in the Party’s manifesto seemed peripheral – a Big Society Bank, a Big Society Day, and a call for greater participation with “every adult in the country a member of an active neighbourhood group” rather than a programme for governing.

In government, the story has moved on. The Coalition has marshalled policy proposals from a range of areas under the Big Society banner. Increasingly, it has been fused with a localism agenda. As a notional solution to the problems of ‘Broken Britain’ and a counterpart to the Post-Bureaucratic State, the concept has an intellectual hinterland.

But despite recent attempts by the Prime Minister to shore up its role within the government’s programme, the concept retains an essential looseness, a weightlessness, which could undermine its potential to become a governing philosophy.

This seeming asymmetry between the twin narratives of deficit reduction and Big Society creates real risks. For many that depend on public services, the consequences of these risks could be long lasting and profound. Much government focus has been on the upside possibilities of a Big Society approach, and there has been comparatively little acknowledgement or discussion of its downside risks and transitional difficulties. Recently however, this has changed.

Threatened by the impact of local authority spending cuts, voluntary sector leaders have begun to speak out. And the city that agreed to become a Big Society champion – Liverpool has recently pulled out, with Council Leader Joe Anderson saying the city ‘could no longer support the Big Society initiative’

Articulate advocates for the idea have emphasized its long-term, transformative potential, with Red Tory author Philip Blond and Jesse Norman MP both locating the Big Society between the poles of free-market fundamentalism and top-down statism. And despite decrying the concept as a ‘cloak for cuts’, Labour leader Ed Miliband has similarly called for a model that rebalances the relationship between citizens, civil society and the state, increasingly seeing government as an enabler: not pulling back, but doing things differently and focusing on building community capacity.

Many within Labour have chosen to promote the Good Society as an alternative to the Big Society. But there is much in common between these essentially loose concepts. At their core both are about seeking to establish a stronger, more associational civil society which is social in its character and they both therefore reject neo-liberal economics and state paternalism.

However, because the Big Society has so far been predominantly presented as a vision, what it lacks is a strategy. Ends require means. And it is not yet clear what these will be. In particular, if the Big Society is to be a theory of governance then we need to think through what its implications are for the economy and for the state. Some of the leading advocates of the Big Society have developed an argument for an economy more imbued with social purpose, which implies breaking up cartels such as the banks, a tougher anti-trust style competition regime, greater localization of finance capital, and a move away from the emphasis on short term shareholder value.

But there is very little sense that the Coalition Government has yet adopted anything like a Big Society approach to the economy.There is an increasingly lively debate about the difference between the Good Society and the Big Society, but both are rooted in the view that we need a stronger civil society in which co-operative social institutions are powerful enough to serve as a counterweight to both the state and the private sector.

However, the key, hitherto insufficiently explored question is about the role of the state. In practice, we know that the state will continue to be responsible for funding, and regulating many public services, as well as ensuring their provision (if not directly providing them). And we also know that such is the inequality of social capital and capacity across the UK that the state will have to do more than stand back if civil society is to flourish on an equitable basis. But there is no new framework or consensus that helps provide policy makers, the public and civil society organizations with a guide to action about the proper balance between state and community.

So as we move into a period during which budget constraint and policy flux will create real, on the ground change, is it possible to recognize insights into the limitations of top-down service delivery and the ‘hidden wealth’of citizens, whilst at the same time thinking more seriously about the role of the state? Can we carve a path between the need for more sustainable public services over the long term, and the need for a route-map that is concerned with equality, and that builds the capacities of citizens 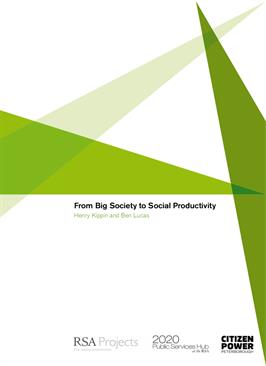