From precarity to empowerment: women and the future of work

This paper aims to raise awareness of the ways in which women are bearing the brunt of economic problems in the UK, and how the labour market, at present, is a precarious environment for many women.

The major challenges posed by radical technologies to the future of work for women, are grounded in low participation in the gig economy, underrepresentation in STEM, discrimination by algorithm in recruitment, and the proliferation of automation. Although these challenges are widespread, and being felt by many across society, our research shows that women are experiencing the resulting precarity most acutely.

Our original polling, in partnership with Populus, revealed that economic security, in both the short- and long-term, was a considerable concern for many women:

We conclude by taking a view on the policy and practice reforms that need to be developed to ensure women are included and empowered in the age of technology.

This paper constitutes the RSA’s submission to the Women’s Budget Group’s Commission on a Gender-Equal Economy. 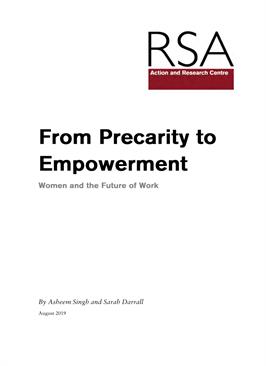