This discussion paper was commissioned by the RSA in partnership with the Think Tank Initiative to explore the changing role of developing country think tanks in influencing policy in today’s ever-changing and complex world.

Growth in the number of think tanks in developing countries in recent years, and the increasing role they play in influencing policy and practice, suggests they could be an untapped resource for sustainable social change.

In addition to getting the basics right, traditional think tanks must innovate to think systemically and act entrepreneurially in order to be a truly impactful organisation in the 21st century. They must also be open to experimentation and unafraid to employ new ways of working.

The paper argues that think tanks must be fit for purpose in order to achieve sustainable social change in their own local context. To do so, they should act politically and exercise power and influence when necessary. Three directions for innovation which could be considered are as follows: 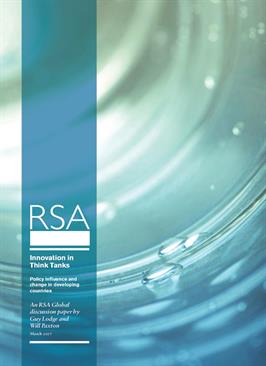