Lack of Options: How a pupil's academic choices are affected by where they live

Does where you live impact on the subjects and qualifications available at Key Stage 4?  Does it matter whether you live in a rich or poor neighbourhood?

Data analysed in OPSN’s second report shows that access to subjects such as triple science and language GCSEs vary enormously, with young people in poor neighbourhoods either denied access or strongly encouraged not to take up certain subjects. OPSN’s data reveals that:

In an accompanying report, kindly sponsored by Leeds City Council, the RSA highlights ‘subject deserts’ within certain local authorities, where pupils are not given the option of finding a school which offers the subjects they want to study.

Roger Taylor, Chair of OPSN and RSA Fellow, said: “These data show that children’s educational opportunities are defined by where they live. Our worry is that these differences reflect decisions made by schools based on calculations as to how schools can appear better on league tables. The evidence suggests that in areas where most children are expected to do less well in exams, the educational opportunities for all children are being restricted.”

However, there are schools bucking the trend. In John Smeaton Academy in east Leeds, we describe a case study of a school that made a conscious decision to broaden its curriculum offer: “For many years leading up to the school going into Special Measures the only opportunity to study science was through B-Tec. Feedback from parents and students was that this was not providing the appropriate grounding for students to pursue further studies in the sciences. The school now offers biology, chemistry and physics at GCSE and A Level (with classes of between eight and 12 in each group).”

These data patterns also raise serious policy questions, including the extent to which Local Authorities should have strategic oversight, the quality of school leadership and how to improve it.

The dataset is published under an Attribution CC BY licence. This license lets others distribute, remix, tweak, and build upon our work, even commercially, as long as the OPSN is credited for the original creation. 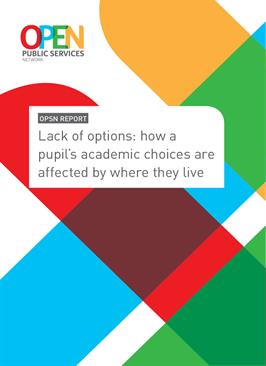