‘Our Manchester: Our Whalley Range' project involved in the region of 10 days curriculum time and staff from RE, History, Geography, Citizenship and ICT. Each class in the year group was assigned a different period of Manchester’s history, and they were then required to plan, film and edit a ‘documentary’ for their chosen period.

The staff who were interviewed identified a number of challenges that remained unaddressed in this pilot activity and which they were continuing to explore.

First, the difficulty of finding ways to assess student learning remained a live issue and one that they had hoped to address through the links with other schools in the Manchester Curriculum project. The challenge of developing cross-curricular and project focused work for staff who have a traditional subject background also remained.

In the early stages of the project, the process involved explicit mapping of subject areas into the project activities. Lessons, however, were constantly being learned and embedded into practice throughout the year.

On the day of my visit, for example, a Friday project day, half the year group was assembled in the hall to start a new project on 21st century learning. Children organised themselves into groups of 7 or 8 around tables in the hall and the Deputy Head gave a presentation with a series of video clips and ideas about the different approaches to teaching and learning that might come to pass in future. 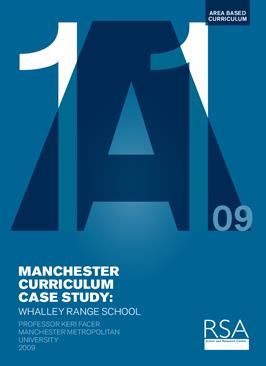