Localism has become a potent idea in UK public policy over the last 20 years. It is a term with no single meaning, whose flexibility has endeared it to politicians across the political spectrum who have used it to rebuke a centralised, distant, bureaucratic status quo. But in an age of dramatic devolution, what do we want from localism?

The RSA’s People Shaped Localism report argues that although the term is imprecise set against concepts such as decentralisation and devolution, it holds a valuable set of values and perspectives that have never been more important for local leaders who want to nurture collective inventiveness and resilience in austere times.

Localism’s elements include an assumption that a sense of local identity, belonging and connectedness are crucial to subjective wellbeing, and to life chances. The localist perspective sees decision-making about the allocation of public resources as likely to be most creative, efficient and legitimate if taking place as close as possible to those who are materially affected.

People Shaped Localism looks at how New Labour attempted New Localism in the face of tenacious centralism. Moving on, the report asks whether the coalition found better ways of making localism a reality through Community Rights. We conclude that given the dramatic changes taking place through sub-regional devolution deals, the Government needs to refresh its approach to localist empowerment, and explain far more clearly how the its vision for devolution and its aspiration for localism are mutually reinforcing.

Our specific recommendations include:

Find out more about the People Shaped Localism project 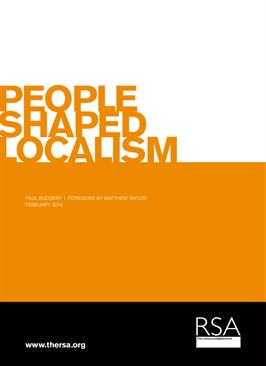