The Police Federation is at a crossroads. With its reputation severely damaged by recent high profile events, the vital service it provides is at risk of losing public and member support. It must be re-examined and significantly reformed in order to ensure that it is equipped to represent its members’ interests effectively and be of value to the communities it is accountable to.

Urgent reform is needed within The Police Federation. The way in which it has responded to challenges in recent years has meant that it has substantially lost the confidence of its members. Its influence and impact on the public and policy debate has declined at a time when front-line officers – already struggling under public service cuts – most need influential voices representing them. Without change, it will also lose the public’s confidence and its legitimacy.

This progress report outlines the initial analysis of evidence gathered by the Independent Review Panel during 2013 and the broad principles for the changes that are needed. This evidence is drawn from Police Federation members, representatives, and a range of stakeholders throughout the policing world. An Ipsos-MORI survey with around 12,500 respondents from within the Police Federation was conducted in September and some of its findings are presented in the report.

The nature of the reforms needed within the Police Federation require a redesign from first principles. To create a platform to build from, we ask:

The clear message that has emerged from all consultation so far is that there is a strong desire for significant change both within the Police Federation and among external audiences. The report identifies and summarises key characteristics we believe should underpin the work of an effective and purposeful Police Federation. In essence, it should be:

Our final report, published in January 2014, details the precise form these changes should take. 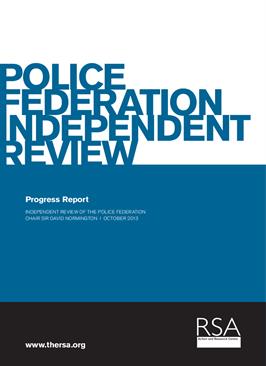