RSA Transitions: a social enterprise approach to prison and rehabilitation

The introduction of working prisons is likely to require significant changes to the workforce and renegotiations of staff contracts.

The government's proposals for working prisons risk becoming a good idea turned bad. Our pamphlet, RSA Transitions, is published at the start of the bidding process for new contracts worth £2.5 billion for running nine UK prisons.

Under RSA plans, prisoners would be paid to work in social enterprises while in custody. This would continue through the gate with the aim of normalising work, addressing resettlement needs and securing employment in the community.

Salaries would make a contribution towards reparation to victims and individual savings towards resettlement. There would be an element of staff and service user ownership linked to performance and rehabilitation.

RSA Transitions has been developed with experts from the criminal justice social enterprise fields. It is designed as a social business that would work with different social enterprises within a single framework. This would be underpinned by rigorous evaluation and involve employers, service users, local services and members of the community in its design, delivery, learning and skills content and governance.

The government has been brave; there are few votes to be won when it comes to prison policy. Yet, it announced its rehabilitation revolution and, in its emphasis on work, recognised the futility of locking prisoners in their cells all day.

In the current environment it is more important than ever for the £2.5 billion to be spent well. Every year, tens of thousands of people will leave prison and return to the community; the critical question is whether prison has made them less likely to reoffend. Prisons, like all public services, need to be measured by their ability to increase social productivity.

The government's criminal justice green paper proposed that prisoners will work a 40-hour week and that providers would be paid by results in relation to tackling reoffending levels. The introduction of working prisons is likely to require significant changes to the workforce and renegotiations of staff contracts.

RSA Transitions welcomes the government's focus on providing paid work in custody but warns that: 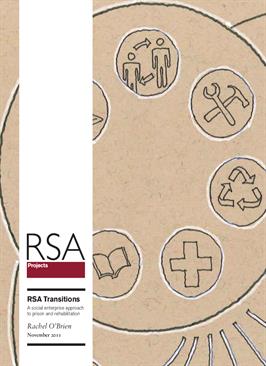