Report: Safer together - policing a global city in 2020

The RSA was commissioned by the Metropolitan Police on an independent basis to look at how the service could adapt to the many changes and challenges it will face over the next five years and more.

'Safer together: policing a global city in 2020' is an analysis based on an extensive consultation, wide-ranging research, and the RSA’s public service and institutional reform specialisms. It is an ambitious set of proposals to generate a public conversation about the future of London’s safety – a critical component of its success as a global city.

Following an extensive engagement with 500 of the most senior Met officers and others throughout the service and a consultation involving more than seventy external organisations, Safer Together establishes a shared mission. This mission involves public agencies, the voluntary sector, companies, the public and the police themselves.

In a context of severe budgetary constraints and a changing pattern of crime, which is becoming more complex, the risk for London is that all those involved in its safety could be overwhelmed. The report outlines an approach that relies on deeper co-operation, better use of information and ‘what works’ analysis, and more extensive engagement of the police with London’s communities and members of the public who need its support.

'Safer Together' is a considered yet ambitious response to the challenges of next few years in London. It provides a wider lens for current concerns on the future of public services and the public’s relationship with them. It will be of interest to all those involved in changes to the public sector and those who rely on these changes succeeding – the public themselves.

Blog: A shared mission for the police, public services and the people 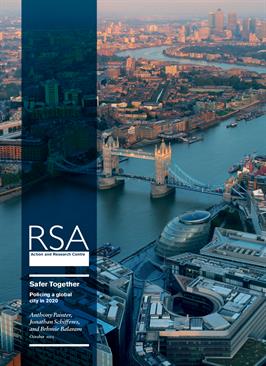