Salvation in a Start-up?

Our report 'Salvation in a Start-up?' explores the factors behind the boom in self-employment and examines what life is really like for the growing numbers of people who now work for themselves.

The UK is experiencing nothing short of a boom in microbusinesses and self-employment. Today there are 600,000 more microbusinesses in existence than there was when the recession first began in 2008, and 40 percent more than at the turn of the century. Likewise, the number of people working for themselves has shot up by around 30 percent since 2000, with the result that 15 percent of the workforce can now count themselves as self-employed.

This phenomenon throws up a number of important questions. What ‘types’ of microbusinesses are becoming more commonplace? What has caused the large increase in recent years? And what effect are they having on the economy and wider society? In a bid to answer these, the RSA and Etsy have launched a new project, The Power of Small, which seeks to better understand this changing community. This report – the first of three – focuses in particular on the individuals involved, including why so many people are turning to self-employment and what this means for them personally.

Our research identifies three myths in particular that have so far distorted the debate: that most of the newly self-employed have been forced into that position, that the boom in self-employment is largely accounted for by ‘odd jobbers’, and that the growth we have seen in the past few years is a cyclical blip that will die down once the economy returns to full health. Indeed, our research suggests that the rise in self-employment has as much to do with structural changes in our economy and society as it does with economic fluctuations. This includes changing mindsets, shifting demographics and the emergence of new technologies.

The fundamental question remains, however, as to whether the growth in self-employment is really a good thing for those directly involved. Should we be enabling more people to start up in business, or should we discouraging it? Relative to others, they appear to work long hours, get paid little and find themselves cut off from the wider world. Yet our research also shows that they are more satisfied and happier overall than most other groups in the wider workforce. As highlighted in the findings of our RSA/Populus survey, the reason is because the self-employed often derive greater freedom, meaning and control from their work.

We finish the report with a number of imperatives for the future: 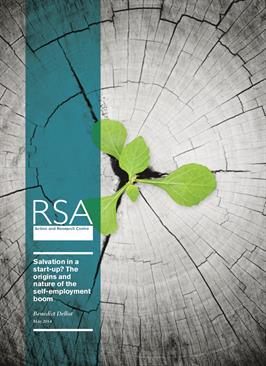