Time for a Plan C? Slow Growth and Fiscal Choices

With the economy in recession, increasing commodity prices, and an on-going crisis across the Eurozone affecting British exports, the RSA has commissioned a series of radical papers to discuss – how can we cope, even thrive, with significant long term slow growth?

High unemployment and falling living standards may well remain a feature of life in the UK under prolonged slow economic growth. At the same time, further dramatic public spending cuts due to be rolled out after the general election inevitably mean ever starker choices about public service provision and welfare entitlements.

Plan C challenges policy makers, opinions formers and ordinary citizens to examine how we might best respond to this new reality. Does slow growth require a more profound shift in policy, expectations and culture? Might it even be possible for some things about our economy, society and culture to improve despite slow growth?

To begin to tackle these questions, there must first be clarity on what it is that the state should be doing and what role individuals have, as well as the degree of redistribution we want through public spending, welfare and taxation. Higher priority will need to be given to public spending that increases growth potential. Crucial long-term investments such as early years education to big infrastructure investment must be sustained in order to raise our productive potential.

In Slow Growth and Fiscal Choices, IFS director Paul Johnson argues that we need to respond to current challenges with serious thinking around the size and role of the state, the level and composition of public spending, and the most efficient and effective way of reforming the tax system. 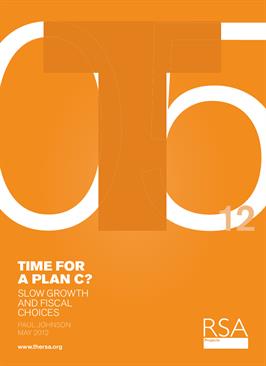