In a culture often thought to be shallow, awash with unfettered consumerism, celebrity gossip, status updates and formulaic scandals, and with our world leaders and politicians seemingly incapable of tackling the major problems of our age, such as climate change, inequality and widespread political alienation, the need and appetite for more ‘depth’ is palpable.

To this end, we argue that spirituality should play a greater role in the public realm.

Written by Dr Jonathan Rowson, Director of the RSA’s Social Brain Centre, this report examines how many of society’s problems risk going unaddressed as we struggle to ‘do depth’ in public – it is historically sidestepped by governments and deferred to religions. But at a time of political alienation and democratic stress, it is no surprise that politicians and the public are now seeking to reconnect with their forgotten spiritual roots.

Spiritualise: revitalising spirituality to address 21st century challenges is the culmination of a two-year project funded by the John Templeton Foundation and the Touchstone Trust. The project received contributions from over three hundred experts including atheists, agnostics, and people of various faiths.

Many people think of themselves as having a spiritual aspect to their lives, but without really knowing what that means. This report puts forth that whilst spiritual identification is an important part of life for millions of people, it currently remains ignored because it struggles to find coherent expression and, therefore, lacks credibility in the public domain.

This report recommends that we all rediscover and develop mature forms of spirituality, grounded both in what we can never really know about our place in the universe, and what we can know – and experience – about ourselves. The spiritual injunction is principally an experiential one, namely to know oneself as fully as possible. For many, that means beginning to see beyond the ego and recognise being part of a totality, or at least something bigger than oneself.

Spirituality can be explored in terms of four main aspects of human existence that are often distorted or misrepresented:

The report concludes with twelve points to be read as calls to action, but not of the conventional injunctive ‘do this!’ variety. In each case, the suggestion is that most issues in the public realm have spiritual roots that we need to acknowledge, engage with, and ‘bring to the table’ when our personal and professional roles oblige us to think more instrumentally. 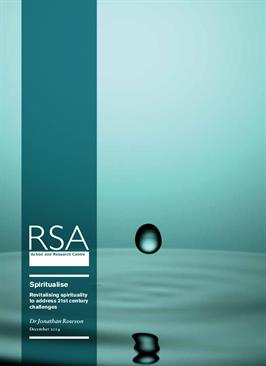