The Emissary Project case study describes the visits taken by Peterborough artists and cultural leaders and examines the learning that took place for the participants.

The Emissary Project was about exchange and representation: exchanging practice and representing the creative community of Peterborough to others. It seemed the logical next step in the Arts and Social Change strand of Citizen Power, which had – largely through the device of the Creative Gatherings – begun to explore the strategic importance of collaboration and collective decision-making amongst local artists and other creative
practitioners. Exchanges of experience, of skills and of knowledge had
already become common practice at the gatherings.

An individual might benefit personally or professionally from these exchanges but they fed, too, into a growing sense of being part of a community rooted in a particular place. They were Peterborough conversations, not just artists networking. It made sense now, two years down the line, to expand those exchanges and those conversations by engaging with practitioners outside the city.

The core idea of the project, then, was encapsulated in the role of ‘emissary’ – defined, according to the dictionary, as an ambassador, a messenger, an agent sent on a mission to represent or advance the interests of another. Chris Higgins of the MAP Consortium, who helped to formulate the project, confirms that it was this idea that differentiated it from the ‘go and see’ schemes that are occasionally run for artists:

“ The idea of the Creative Gathering as a collective body was important, so they wouldn’t be going out purely as individuals. There could be a personal angle, of course, but the idea was that you were carrying a number of questions from the community, pursuing lines of enquiry on everyone’s behalf. ‘Go and see’ schemes are usually about targeted professional development for individuals. Here, those going out to other cities to learn from their experience and expertise were also ambassadors for the great work going on in Peterborough, the energy evident in the Creative Gatherings.

Things had reached a point here where outside influence could be seen as a treat not a threat. People were looking for and absorbing outside practice – outside the city, that is – as a kind of nourishment rather than feeling crowded out and undermined. The Emissary concept evolved to echo that.” 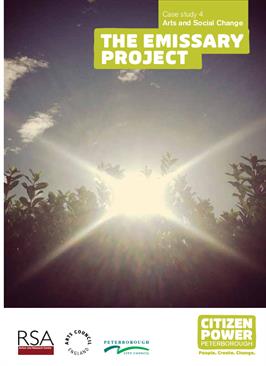