The Missing Middle: The case for school commissioners

The current arrangements for an intermediary or middle tier in education are dysfunctional and bedevilled by a lack of trust between ministers, local authorities and many school leaders. There is also confusion about other middle tier roles and functions. A reformed system is needed that can support the development of networks of great schools and ensure that no school is left behind.

We have schools and cohorts of students that rank with the best in the world, but as a country we are held back educationally and economically by also having a long tail of underachievers. The holy grail for policymakers, politicians and education leaders is how to get all schools to match the performance of the best.

At present, we have local authorities, central government, teaching school alliances, federations, chains and partnerships, the National College, private companies and other school improvement initiatives all exercising what, in the broad sense of the term, might be called middle tier functions.

This fragmentation matters because, although the creation of a diverse range of school improvement providers is a positive development, the impact is likely to be greater by knitting together their efforts to reduce duplication, share intelligence and learning, and ensure schools don’t get left behind.

Governments have recognised that local authorities do have an significant strategic role to play. But while they have important functions to fulfil, there are other roles that are best undertaken on a larger scale. The London and other City Challenges demonstrate that coordination, leadership and shared vision at a city or sub-regional level can have a powerful impact. A commissioner could help provide this coordination and collaborative focus.

A commissioner would control the capital budget, hold the funding agreements with academies and have the duty and power to decide when to close or refranchise failing schools. They would also have a school improvement budget to disburse at their discretion.

However, a commissioner’s role would be as much about the exercise of soft power. The commissioner would develop the vision and then knit together the roles of schools, chains, teaching school alliances, local authorities and other partners and align them around a common purpose. A commissioner would also navigate the local and regional relationships that can support learning and learners.

This report argues for the redefining and redrawing of the middle tier in English education not as an end in itself, but as a more effective means of building a system of great schools and of providing better educational opportunities and outcomes for young people. In an educational system characterised by its great and increasing diversity, it is time to radically slim down the Department for Education and devolve powers to new regional or sub regional education commissioners. 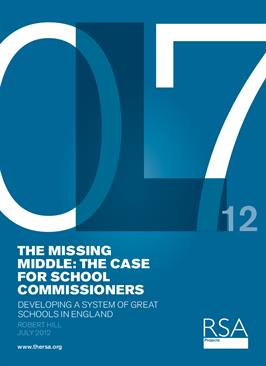