The ambition of The Resourceful Architect was to prompt and give exposure to new ideas for the future uses of architecture in the changing context of professional practice. Submissions were expected to be diverse in form and character, and to express critical thinking about potential new directions for contemporary architectural practice.

The project recognised that many architects now operate in radically different circumstances from those for which they were trained; and that the economic downturn might offer architects an opportunity to re-cast themselves in a new social role within a distributed, local economy.

The call recognised and sought to give exposure to the resourceful forward thinking many architects have shown, and are continuing to show, in the prevailing climate of financial constraint, emphatic localism and reflexive critique. Proposals could be entirely new and prompted by the call, or they might be already in development; they might also be completed but under-exposed.

All the judges were briefed to look for resourcefulness, and specifically to consider: 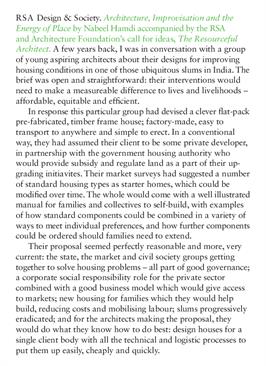