Self-employment is booming. The number of people who work for themselves has grown by more than 40 percent since 2000, and nearly half of all jobs growth since 2008 is owed to these self-starters.

This is broadly speaking a positive trend. Yet the self-employed face a number of distinct challenges, including a lack of sick pay, insufficient parental pay, no employer pension contributions, and volatile incomes caused by late payments.

Typically we would look either to the government or the market to resolve these problems. However, this RSA and FSB report takes a look at a third source of support: bottom-up solutions that are led by the self-employed themselves.

Often these come in the form of well-known institutions of collaboration such as cooperatives and unions. But novel initiatives have also emerged in recent years, such as sick pay funds to manage ill health (e.g. Broodfonds), salary guarantee funds to deal with late payments (e.g. SMart), and platform cooperatives that are directly owned and run by the gig workers who use them (e.g. Loconomics).

Our report calls for a movement of mass self-organising among the self-employed, and sets out a number of ideas to take grassroots initiatives from the margins to the mainstream.

We recommend adopting new messages to make self-organising more appealing to a broader section of businesses, encouraging unions to incubate bottom-up initiatives, ironing out flaws and clarifying the interpretation of different regulations, and weaving self-organising schemes into the delivery of Universal Credit and employment services like the New Enterprise Allowance.

With the launch of the new Parliament we have an opportunity to think afresh about how the needs of a growing self-employed workforce might be met. We hope this report offers a dose of inspiration. 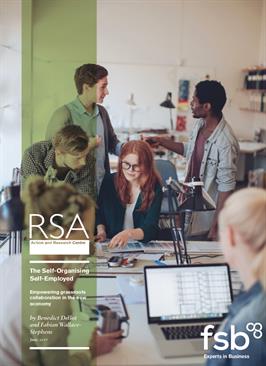