The Government is taking very seriously new knowledge about behavioural science and how it might be used to tackle pressing social issues, but approaches to behaviour change have so far been inadequate. The major adaptive challenges of our time, including debt, climate change, public health and mental health, require a deeper and more ambitious approach.

Our rapidly advancing knowledge about the brain and behaviour has raised legitimate concerns about how such knowledge might be brought to bear on social issues. At the same time an explosion of interest in behavioural economics has turned behaviour change into an explicit public policy goal.

Both trends have created challenges for the public understanding of science, and raised questions about the relationship between science and society more generally. Some believe that the scientific insight into our natures may help us to shape our behaviours and cultures for the better. Others express concern that, instead of helping to inform public discussion, reducing human behaviour to a ‘science’ will only aid the suppression of public dissent.

Building on the work of the RSA Social Brain project, Transforming Behaviour Change argues for a more sophisticated and effective understanding of the relationship between our behaviours and our brains and the challenges society faces through a considered response to two major cultural developments: the ascendancy of neuroscientific interpretations of human behaviour, which have led to fears of reductionism and pharmaceutical control, and the government's policy goals around behaviour change, which has led to fears of government manipulation and coercion.

The report critically engages with these two developments and proposes an alternative approach to behaviour change that builds on existing public and professional interest in the brain and behaviour. In shifting attention away from the threatening idea of ‘science as authority’, justifying moral judgements, medical interventions and policy positions, it focuses instead on the more productive notion of ‘science as provocation’, helping people foster the kinds of self-awareness and behaviour change they are seeking to develop. 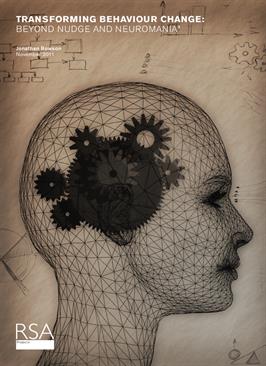