Untapped Enterprise: Learning to Live with the Informal Economy

The informal economy is perceived as a significant challenge for the UK. It reportedly undermines the country’s already unstable tax base, creates unfair competition for businesses that are fully compliant, and leaves many informal workers insecure in times of hardship.

Written in partnership with Community Links, our Untapped Enterprise report seeks to change the tone of the debate. We argue that engaging in informal activity is often a necessary step along the journey towards becoming a successful entrepreneur.

Our YouGov poll found that twenty percent of small business owners had traded informally when starting their company. Of these:

Nearly half (48 percent) of all respondents cited red tape as one of the biggest individual factors in preventing entrepreneurs from being able to register their business. Thirty-four percent identified high business and personal taxes as a major barrier to formalisation.

The report concludes that the punitive approach historically used in the UK to date isn’t working and that more should be done to support people to register their businesses.

We argue that the government consider recognising the informal economy to be a legitimate stepping stone that helps informal entrepreneurs make their way to the formal economy. Forty-seven percent of the RSA’s survey respondents agreed that engaging in informal trading is often a necessary step as part of the journey towards becoming a successful entrepreneur. 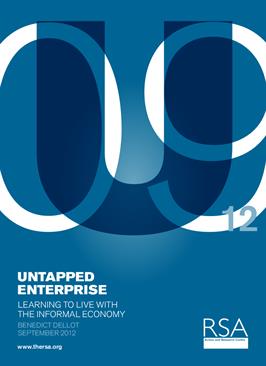