Work in an age of radical technologies

2018 has been a year of astounding technological feats.

JD.com, a giant Chinese e-commerce platform, recently opened a Shanghai fulfilment centre that can process 200,000 orders a day with just 4 employees. At its annual conference in May, Google introduced an AI virtual assistant called Duplex that can mimic the human voice with uncanny precision. Amazon, meanwhile, will soon open checkout-less grocery stores in Chicago and San Francisco, in what could be the first major transformation of bricks-and-mortar retail in decades.

From autonomous vehicles to cancer-detecting algorithms, and from picking and packing machines to robo-advisory tools used in financial services, every corner of the economy has begun to feel the heat of a new machine age. The RSA uses the term ‘radical technologies’ to describe these innovations, which stretch from the shiny and much talked about, including artificial intelligence and robotics, to the prosaic but equally consequential, such as smartphones and digital platforms.

But what do these technologies mean for workers? Here there is still little consensus. Leading robotics expert Rodney Brooks describes fears of mass automation as “ludicrous”, whereas Amazon CEO Jeff Bezos claims “it’s hard to overstate how big of an impact [AI is] going to have on society over the next 20 years”. Adair Turner, Chairman of the Institute for New Economic Thinking, believes automation will be “rapid, unstoppable and limitless”.

Disagreements can also be seen in the predictions of job losses, which range from the catastrophic to the subdued. The University of Oxford estimate that 35 percent of UK jobs have the potential to be automated. In contrast, PwC suggest the figure is more likely to be 30 percent, while a 2017 McKinsey report said 5 percent of UK jobs are highly automatable. MIT Tech Review has identified at least 18 automation predictions, no two of which are alike.

What is certain is that the world of work will evolve as a direct consequence of the invention and adoption of radical technologies — and in more ways than we might imagine. Alongside eliminating and creating jobs, these innovations will alter how workers are recruited, monitored, organised and paid. Companies like HireVue (video interviewing), Percolata (schedule setting) and Veriato (performance monitoring) are eager to reinvent all aspects of the workplace.

With support from our partners, the RSA is launching a new Future Work Centre to explore these impacts in more depth. Our goal is to equip policymakers, employers and educators with the insights they need to prepare today’s workforce for tomorrow’s workplace. Where necessary, we will push for policy and practice reform, but more importantly we will seek to reimagine our social contract — that web of explicit and implicit rights and obligations that govern the way we work.

Past experience tells us nothing can be left to chance. Globalisation, the last turbulent force to rock our labour market, left too many workers and communities behind in its wake. While radical technologies hold out the promise of creating a better world of work, this is an outcome that must be worked towards rather than blindly hoped for. The Future Work Centre aims to do just that, using a combination of research, policy and practice advocacy, campaigning and practical pilots.

We are grateful to Taylor Wessing, Friends Provident Foundation, Harbour Foundation, Google.org and donations from an RSA Fellow, without which this programme of work would not be possible. 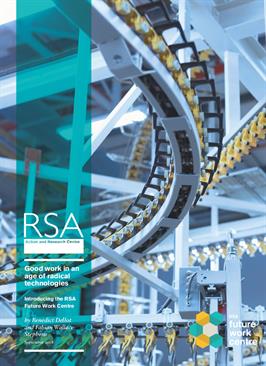