The RSA and Etsy will shortly publish a report highlighting the dramatic growth in the number of microbusinesses in the UK. Here we trail some of the findings from a Populus survey we conducted as part of the research.

Readers of this blog will know that the RSA has been paying a great deal of attention to microbusinesses of late. Why so?

The simple reason is because they are growing at such an astonishing rate. According to our analysis of the data, the number of microbusinesses (defined as firms with 0-9 employees) has grown by around 620,000 since 2008 to reach 4.7 million firms. Likewise, the proportion of people in self-employment has reached a record level.

A number of commentators have asked what the growth of the microbusiness community will mean for the economy and wider society – for living standards, jobs growth, innovation and productivity. But few have questioned what it could mean for political and social attitudes. This is surprising, since the self-employed are becoming a powerful electoral force to be reckoned with. In a previous blog, I laid out our (somewhat crude) prediction that the number of people who work for themselves will soon outnumber those employed in the public sector.

The question is, what do the self-employed really think about the way society is heading? And what do they want from politicians and policymakers? Despite cautious optimism about the future of the economy, the Populus poll we commissioned reveals that the political class may be out of touch with the views of microbusiness owners, many of whom feel they continue to lack enough support from government.

Here are some of the top-line findings:

Business confidence is finally returning – 41 per cent of microbusiness owners slightly agree that the economy is getting better and that the country is heading in the right direction, but a fifth still disagree.

Labour has yet to connect – An overwhelming number of microbusiness owners feel that the Conservatives have the best policies for their business (at 46 per cent). Only 10 per cent say Labour. Many say none of the political parties.

An immigration cap is supported by microbusinesses – Nearly half (43 per cent) of microbusiness owners completely or strongly agree that they would favour a significant cap on immigration. Less than a fifth (19 per cent) disagree.

Views on Europe are mixed – Around a third (37 per cent) of microbusiness owners would vote yes to exit the EU in a future referendum. 40 per cent say they would vote no. 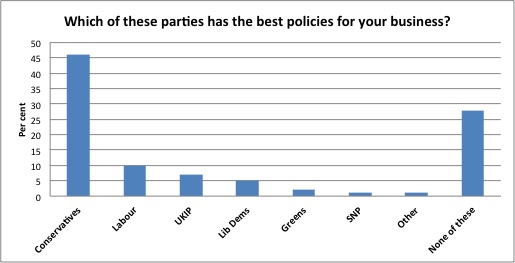 Keep your eyes peeled for the full findings of our research, which will be revealed in a report to be published later in the Spring. Our other data goes beyond political attitudes to cover microbusiness owners' motivations, hopes for work, attitudes to growth, business styles, use of new technologies, and a whole host of other topics.

Find out more about the RSA/Etsy Power of Small project.

Populus interviewed a random sample of 1006 business owners/leaders with 0-9 employees. Surveys were conducted online across the UK between 26th February – 12th March. Populus is a founder member of the British Polling Council and abides by its rules. Further information at www.populus.co.uk.