The RSA is a charity, and strictly non-partisan, but Mathew Taylor has previously given his thoughts on Progressive conservatism and it seems important to engage with the main ideas of the would-be next government as fairly as possible.

Cameron repeated one of his more memorable signature lines: "There is such a thing as society, it's just not the same thing as the State." This line sounds like a suitably respectful departure from Margaret Thatcher's most famous "There is no such thing as society" quote, but in fact, when you read Thatcher's original, and typically decontextualised quote, in full, she was saying something quite similar (to women's own magazine October 31 1987):

"I think we've been through a period where too many people have been given to understand that if they have a problem, it's the government's job to cope with it. 'I have a problem, I'll get a grant.' 'I'm homeless, the government must house me.' They're casting their problem on society. And, you know, there is no such thing as society. There are individual men and women, and there are families. And no government can do anything except through people, and people must look to themselves first. It's our duty to look after ourselves and then, also to look after our neighbour. People have got the entitlements too much in mind, without the obligations. There's no such thing as entitlement, unless someone has first met an obligation."

Ten years later Tony Blair spoke of the need to combine rights with responsibilities, which again makes you wonder if they all mean much the same thing, with only slightly different degrees of emphasis. However, the tone of Thatcher's quote is rather different, and more combative in spirt than Cameron's distinction, or Blair's juxtaposition. When Thatcher says 'there are individual men and women and there are families', I don't sense she is thinking of community, and her vision of the social world does sound relatively atomised.

Cameron clearly sees community ( "the ultimate warm fuzzy" as a recent RSA seminar attendee put it) as part of the picture of a healthy society, as he made clear in his speech: 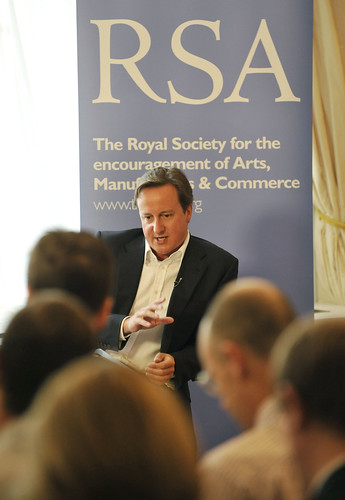 "There is such a thing as society, it's just not the same thing as the state."

The use of 'responsibility' has a more Thatcherite feel, but detractors could point out that calling for responsibility entails ensuring response-ability too. Patterns of inequality make some people and some areas much more able to respond than others. Indeed, it has recently been argued that the growth in inequality over the last decade is a legacy of Thatcherism.

Such political claims remain contentious, but at a conceptual level it seems clear that you cannot be responsible if you are not able to respond. So while it may be legitimate to encourage greater responsibility at an individual and community level, there is presumably also a role for goverment to enable such responsibility.

Part of what connected communities is about is understanding the basis of response-ability at a community level. Many local government departments and third sector projects are likely to face actute financial shortages soon. They will have the same responsibilities, but in the absence of adequate financial capital, we need to understand how to harness existing levels of social capital so that people are genuinely able to respond.