Service Children's Education: the Military Covenant with a smile

RSA Education has begun a new partnership with Service Children’s Education, the agency responsible for the children of Ministry of Defence personnel, service and civilian, who are based overseas. SCE currently provides education for over 10,000 pupils in 38 schools in nine countries.

To begin the partnership, I spent two fascinating, inspiring days at JHQ, a garrison in Rheindahlen near Dusseldorf that serves as the central headquarters of the British Forces in Germany. JHQ will close next year, and the start of this process has been wonderfully documented by pupil Callum Kelly through his Gold Arts Award.

We are working with SCE to help them think through their education offer during a time of considerable change for the organisation, and plan some projects that connecting their schools to our work on Opening Minds and the Area-Based Curriculum. This builds on some fantastic work SCE schools did through Creative Partnerships, including this animation that connected primary pupils at St Patrick’s School to their grandparents back in the UK.

Overall, I was struck by both the deep similarities and the subtle but significant differences between SCE schools and schools back here in England. Staff attrition is lower but pupil turnover much higher; teachers are ‘deployed’ as civil servants; headteachers do not have control of their own budgets, but, with the power of Commanding Officers, can issue parking tickets, and are informed immediately if their teachers ever have contact with the Military or host nation’s police!

It is clear that SCE schools are delivering a high quality education for their pupils. Their schools, leaders and teachers have expertise, especially around mobility and bereavement issues, as well as around closing schools properly, that the rest of our system needs to learn from. The Year Six and Eight pupils I spoke to handle their own regular ‘redeployments’ with resilience (as well as with Skype and Facebook). The two schools I visited were a highly creative and clearly deserve their Artsmark Gold awards. Windsor school has taken on the challenge of disconnection and isolation to make sure that, despite being on a garrison, their students experience as many external learning opportunities as possible. Teacher Chris Scholl’s Comenius project has connected pupils to other countries, and to help them explore aspects of their own identities.

The passion that the two remaining JHQ schools showed for ensuring a fantastic final year for their staff and students is extraordinary. The schools wish both to carry on as usual, and mark the end of the schools and JHQ through celebration as a ‘teachable moment’. We are exploring options for a Heritage Lottery Fund project, led by schools, but exploring the history of the whole garrison. 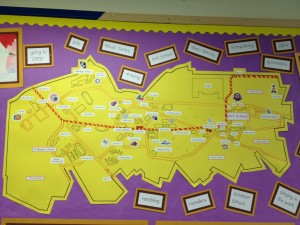 In many ways, SCE operates like an old fashioned local authority, in the best sense of the word. The inspectors and advisers have the up to date knowledge, resources and authority to make a real difference to school improvement. Schools appear to have the autonomy they need to do the job well, without some of the burdens that control over budgets, staffing and governance bring. With a reduction in schools and personnel this may change in the years ahead, and SCE is already thinking deeply and carefully about new structures and partnerships. However, there is something precious and special about the existing infrastructures and relationships, and even some of the quirkier rules and regulations, linked to their ties to the Ministry of Defence. We hope that, in the year ahead, RSA can help SCE and its schools to design their own future, rather than have an outsourced solution thrust upon them.