When is the right time to eat stale doughnuts?

On a recent trip to the States to visit family for the holidays, I had the opportunity to watch a whole host of mediocre films on the transatlantic flights.  One of these was The Five Year Engagement with Emily Blunt and Jason Segel, a mix of romance and comedy with a surprising dose of psychology, too. 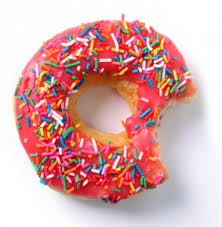 In it, Emily Blunt’s character is a psychology post-doc who runs an experiment based on Walter Mischel’s famous marshmallow experiment.  For anyone unfamiliar with this study, Mischel gave young children a marshmallow and left the room.  Each child was given the following choice: wait for the experimenter to return and receive two marshmallows, or to eat just the one marshmallow while waiting.

There have been several replications of this study, and there is a great clip on youtube filming the children – the effort expended to resist temptation is palpable, and it is fascinating to see what strategies the children come up with to help them stay on course and refrain from eating the first marshmallow.  The study, its replications and follow-ups are generally thought to be about self-control, and have produced various findings about the correlation between the ability to delay gratification and various measures of ‘success’ down the line including, for example, SAT scores.

Emily Blunt’s character runs a similar experiment but, instead of pitting one marshmallow now against two marshmallows later, she uses stale doughnuts immediately and the prospect of fresh doughnuts later.  She unintentionally catches her fiancé, Jason Segal, chowing down on the stale doughnuts she is about to bring to the lab for her experiment, and in a nutshell, concludes that his lack of self-control essentially destines him to be a life-long loser and the couple eventually part ways.  When she confronts her now ex-fiancé about it, he replies something along the lines of: “when you aren’t sure that the future promise will ever actually materialise, being impulsive can be a good strategy.”  Effectively, eating stale doughnuts is better than eating no doughnuts at all.

This is a very interesting point, and sheds a different light on the interpretation of the famous marshmallow study.  Celeste Kidd and colleagues from University of Rochester recently published a paper on this very question. I’m not sure which actually came first, the movie or this new study, but both attempt to tease out the role of trust in the future, or reliability, from simple self-control.

These findings support the ‘something is better than nothing’ idea discussed above, and show that reinforcing stability and reliability (or instability and unreliability) in a person’s environment can substantially influence their behaviour.

The researchers run the marshmallow experiment as per Mischel’s original study, but prior to doing so they create an environment which is either “reliable” or “unreliable”.  To do this, they set the children the task of an art project, and provide them with a supply of not-too-great broken crayons.  The children are told that if they wait, the experimenter will come back with much better art supplies.  In the reliable treatment, the experimenter does indeed return with a set of much better art supplies, but in the unreliable treatment, the experimenter returns without anything and apologises for making a mistake – there are no new, better art supplies and the child should go ahead and use the existing supplies.   After this task, the researchers then conduct the marshmallow test.

Children in the ‘reliable’ group waited on average roughly 12 minutes before succumbing to the temptation of the marshmallow, whereas those in the ‘unreliable’ waited a mere 3 minutes.   This is compared to an average of roughly 6 minutes in the control group.  These findings support the ‘something is better than nothing’ idea discussed above, and show that reinforcing stability and reliability (or instability and unreliability) in a person’s environment can substantially influence their behaviour.

The original interpretations of the marshmallow study are of course fascinating in their own right, and I am especially interested in the use of strategies to redirect attention away from the marshmallow to help with self-control; attention, along with decisions and habits, is one of the core thematic strands of the Social Brain Centre.  But the marshmallow study revisited throws up other questions: when is certain behaviour driven by impulsivity and when is it driven by unreliability?  Should creating a reliable environment be the job of parents, teachers – and even employers?  And is the economic and environmental uncertainty that we all are currently facing impacting our behaviour and encouraging us to eat stale doughnuts?