Who owns information: The defining battle of our time?

Could our major problems have a discernible 'form' that is somehow more fundamental than their content? If there is some sort of pattern, wouldn't it make sense to target the pattern as a whole, rather than individual issues piecemeal? Marxists might say that Capitalism as such is the underlying problem, but I don't think we have to endorse that view to look for what Bateson once called "the pattern that connects".

We will shortly be publishing a report examining Iain McGilchrist's work that argues there is a discernible pattern relating to the distinctive phenomenologies of the two brain hemispheres. The claim is that many of our major problems relate to the fact that the 'inferior' (though definitely important) left hemisphere is slowly usurping the (wiser but more tentative) right hemisphere at a cultural level, with the consequence that we live increasingly virtual and instrumental lives, and may not even realise what we are losing. The details of that discussion are coming soon to a screen near you, but there are other ways to conceive the form of the problem.

"Information is power. But like all power, there are those who want to keep it for themselves." - Aaron Swartz.

When you start to think deeply about our major challenges - including climate change - you quickly run into various vested interests that get in the way of solutions, and many such vested interests are preserved through unequal access to information - academic, technological, legal, environmental, political, financial and so forth. Information should be a public good, and benefits larger numbers when it is shared, but perhaps the main way that vested interests perpetuate their power is through the control and protection of information. For instance what do Shell tell us about their research into drilling in the Arctic, and how can we know it represents full disclosure? What if a doctor prescribes you medicine and you can't access the relevant primary research because you run into a pay wall? What if the most promising components needed for a technological breakthrough on clean energy are patented by a small group, and therefore thousands of scientists can't follow that path of inquiry?

Information should be a public good, and benefits larger numbers when it is shared, but perhaps the main way that vested interests perpetuate their power is through the control and protection of information.

Such control of information is deeply related to financial dependency. Those who control information are supported in their control by law and lawyers. An excerpt from a talk by Harvard academic and activist Lawrence Lessig captures the centrality of this point.

"(American) politics is filled with easy cases that we get wrong. The scientific consensus on global warming is overwhelming, but we abandon the Kyoto Protocol. Nutritionists are clear that sugar is unhealthy, but the sugar lobby gets it into dietary recommendations. Retroactive copyright extensions do nothing for society, but Congress passes them over and over.

Why? Because the trusted people in each case are acting as dependants. The politicians are dependent on fundraising money. They are good people, but they need to spend a quarter of their time making fundraising calls. So most of the people they speak to our lobbyists and they never even hear from the other side. If they were freed from this dependence they would gladly do the right thing.

The scientists get paid to sign on to studies done by the drug companies. The law professors get paid to consult.

How do we solve it? We need to free people from dependency. But this is too hard. We should fight for it, but politicians will never endorse a system of public funding of campaigns when they have so much invested in the current system. Instead, we need norms of independence. People need to start saying that independence is important to them and that they won’t support respected figures who act as dependants. And we can use the Internet to figure out who’s acting as dependants."

At the risk of simplification, the underlying problem is that the inequality in power is perpetuated by the unequal access to information, and this is a self-perpetuating problem because those with power based on information use it to create dependants, and these dependants thereby develop a vested interest in protecting the information that forms their livelihood.

Why did nobody tell me about Aaron Swartz?

I started to think about this when I realised, sadly, that I never knew the pioneering cyber activist Aaron Swartz while he was alive. He recently ended his own life at the age of 26 under enormous legal and political pressure, but is viewed by many as a hero of our times who was driven over the edge by an excessively zealous witch hunt. He was known for being prodigious and hyper-intelligent, but is perhaps best known and admired for the way he swiftly conjured enormous political capital to prevent the SOPA (Stop online piracy act) law in the US which he speaks about so clearly and compellingly here (highly recommended viewing). In essence he prevented the passing of a law that would have radically undermined people's capacity to connect and share information online, and the way he did so is inspiring, because it looked like he was facing impossible odds. 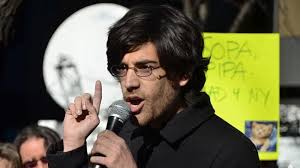 A friend and former RSA colleague Jamie Young remarked that if I was going to write about Aaron Swartz, I should also mention the UK's Chris Lightfoot who was a similar character fighting a similar kind of battle - a broadly political fight about who rightfully controls information-  and also took his life at a young age. The RSA has raised similar questions before, for instance by hosting Evgeny Mozorov who's talk on why Dictators love the internet was turned into an RSAnimate.

What all these thinkers share is a belief that the access to information has much wider implications that people typically realise.

What all these thinkers share is a belief that the access to information has much wider implications that people typically realise. As Professor Shamad Basheer puts it in the Spicy IP Blog We live in "a world where the powers that be conspire time and again to reassert hegemony and re-establish control in a digital world whose essential DNA is one of openness and sharing."

The main take-home point for me lies in the gap between the social norms of sharing and openness online, with the economic and legal norms relating to the perpetuation of property rights and power that have been formed before the digital age. In Aaron Swartz's case, this battle unfolded in his heart and mind to a tragic extent, but the more I think about it, the more it seems like an enormously important battle between the public good and private ownership that will be defined largely by the political will of the relevant institutions - which in turn is shaped by us (that's what Lessig was getting at above about the need to shape social norms).

It may not make sense to 'take sides' as such, and there are certainly ways to protect intellectual property that are more canny and proportionate. (As an author of three books, all of which have been PDFed and sold cheaply by Xerox merchants online, I am also a kind of 'dependant' with a vested interest here).

Whatever you think, I would ask you to reflect on the opening quotation by George Bernard Shaw. Ideas need each other to flourish, but they can't meet when they are help in captivity, and they will ultimately need some form of power to free them.