Climbing up The Shard: A sane response to an insane situation?

Just wanted to spread the word about #iceclimb which takes a bit of getting your head around. In essence, six trained female climbers are going up London's tallest Skyscraper to draw attention to Shell's drilling for oil in the Arctic.

The Guardian summarise the story nicely here and the main website with a live video is here. 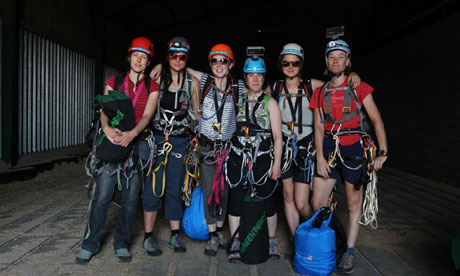 And why exactly are they doing this? From Greenpeace:

"This building - modeled on a shard of ice - sits slap bang in the middle of Shell's three London headquarters. They don't want us talking about their plan to drill in the Arctic. We're here to shout about it from the rooftops. Join in by sharing this far and wide."

It sounds pretty insane to climb up the shard, but in light of the dire climate change situation highlighted here yesterday, particularly the need to keep fossil fuels in the ground and the role of ice in reflecting sunlight back into space, is it not even more insane to drill for oil in the Arctic?

I guess that's their point. At the time of writing they just passed the half way mark....