It may not feel like it but the next general election is getting very close. Each party will already be poring over the stats thinking about which demographics they most need to appeal to. Thatcher supposedly depended on winning over the Essex Man, while Blair is said to have courted the vote of Mondeo Man.

But what about this time round in 2015? Will it be the growing BME demographic as some have claimed, or the so-called ‘purple vote’ of people with disabilities? No doubt each of these will have a big impact on which way the political barometer swings in 15 months time. But there is one group in particular that will prove an electoral force to be reckoned with: the self-employed.

Why? Because the number of people working for themselves has skyrocketed in recent years. Since 2008 more than half a million people have moved into self-employment, and as a result they now make up 16 per cent of the workforce. Nor does this trend appear to be slowing. The latest figures from the Labour Force Survey show that the numbers running their own business increased by over 140,000 in the last quarter – one of the biggest jumps seen for years.

Putting this into context, it means that the growing community of self-employed will soon outnumber the once sizeable public sector workforce (hat tip to Hamish McRae for first pointing this out). The graph below projects the future size of both these groups based on average growth rates since 2010. On the RSA’s own measures, the crossover will take place sometime in late 2017 or early 2018. 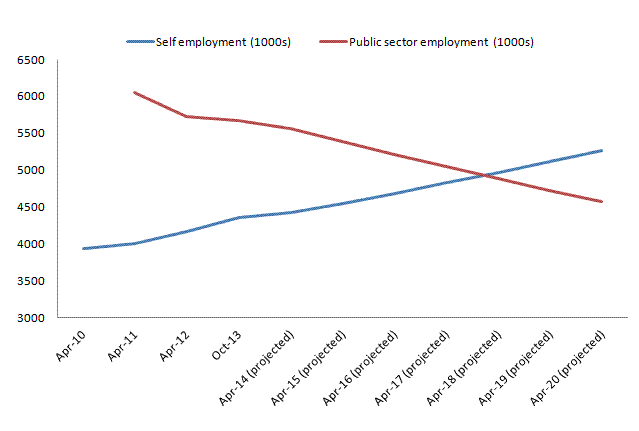 By 2015, at least, we can already expect there to be around 4.4 million self-employed people – a huge number of potential voters to be courted. True, this is around half the clout of the grey vote (10 million people are over the age of 65), two thirds of the purple vote (6.9 million working-age people are disabled) and a third of the married couple vote (12.2 million couples are wedded). Yet it is a formidable and growing electorate nonetheless.

How this group will affect the political and policy landscape over the coming years remains to be seen. They will no doubt insist on greater support from the state to protect their own livelihoods – and rightly so. In practice this may mean demanding support to secure fairer mortgage rates (currently very difficult for the self-employed), to find help in contributing to private pensions, or to access better terms on the Universal Credit, which as it stands will require business owners to go through several onerous hoops before they receive assistance.

The voice of the self-employed will also become louder on wider political issues affecting the health of their business. They could add greater weight to arguments for looser immigration rules, given that many will rely on outside talent. Likewise, they may boost the numbers on the pro-Europe camp if they happen to export abroad.

They might also add to calls for a stricter welfare state and the sharp cuts to out-of-work benefits – the rationale being that if they were able to pull themselves up by their bootstraps then why can’t anyone else? The last British Social Attitudes survey in 2012 showed that the self-employed were the least likely to support an increase in taxation and spending than any other labour market group – and by some margin.

Of course, these predictions are based on stereotypes and conjecture. Moreover, many of the people who started their business reluctantly - including those made redundant from the public sector - may be less concerned with securing better rights and terms for business owners then getting themselves back into a typical job. Yet these caveats notwithstanding, it is clear that the self-employed will soon be a political force to be reckoned with.

As mentioned in my last blog post, both Labour and the Conservatives are already vying to become the party of small business. Indeed, David Cameron recently described them as the "lifeblood of our economy". But let's be serious: it's going to take more than the backing of Small Business Saturday (Labour) or a video message of support on YouTube (Conservatives) to win the votes of this energetic, driven – and most importantly – growing electorate.

The RSA and Etsy are exploring similar themes in a new project, The Power of Small.