You may have heard the news that today the Intergovernmental Panel on Climate Change once again highlighted that the potential impacts of climate change on humans are likely to be significantly worse than a slap in the face with a wet fish. The cartoon below* tells you everything you need to know about today's announcement: 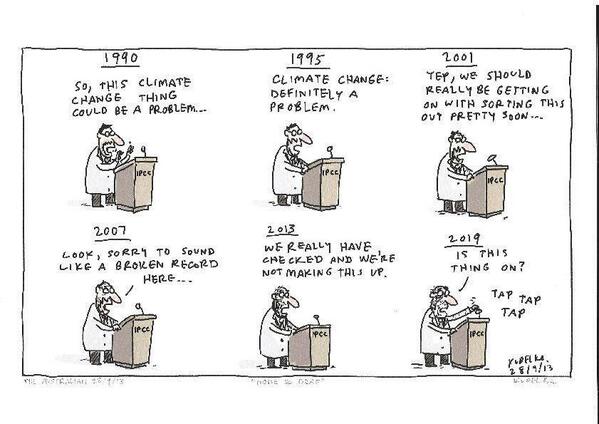 The BBC led with a suitably troubling headline saying that Climate Change impacts are likely to be overwhelming. To be clear, these overwhelming impacts are not about a few cheeky if somewhat devastating storms, droughts and floods that we can handle with some good emergency services and a stiff upper lip. The relatively neglected point that today's report serves to detail is the concomitant impact on our food, water and energy supplies, and likely consequences relating to disease, poverty, inequality, immigration and war.

One should take care not to sound alarmist (even if it's bl**dy alarming!) but it is worth considering that such impacts are not projected to take place at some point in the distant future in a far away land, but coming soon, one way or the other, to you, your family and friends, in a city near you.

I am not sure how best to respond today, not least because I'm preparing for tonight's event, but I did want to take this chance to say a few things off the cuff:

Dr Jonathan Rowson is Director of the Social Brain Centre at the RSA. He tweets @jonathan_rowson

*(I haven't able to track the original source for this image, but will gladly do so if somebody else can.)